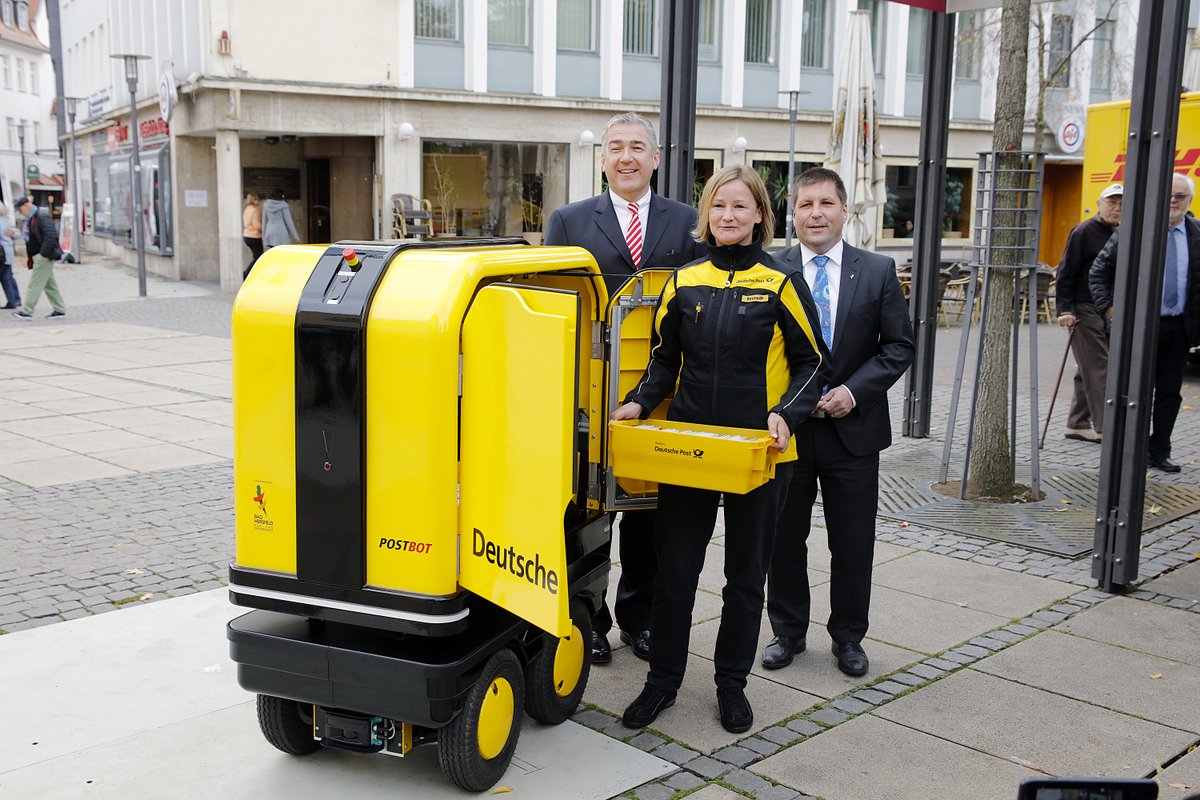 DHL, the world’s largest logistics company, has unveiled an autonomous vehicle designed to carry letters and parcels and follow around the postal worker as he or she delivers mail items from door to door.

The robotic parcel carrier – called PostBot – could move along in tandem with the worker, saving time overall and energy on the part of the human.

DHL selected the a town called Bad Hersfeld to test the self-propelled electric robot. Bad Hersfeld is said to be a “smart city”.

Deutsche Post has selected the German town of Bad Hersfeld as its test site for a robot to accompany mail deliverers on their routes and carry their mail items.

The project was announced at a joint press conference between the mayor of Bad Hersfeld, Thomas Fehling, and Jürgen Gerdes, CEO of the the parcel division of Deutsche Post DHL.

Residents of two delivery districts in Bad Hersfeld can immediately expect to start seeing the PostBot accompanying the mail carrier.

The robot can carry up to six post trays, relieving carriers of their heavy loads.

It also frees up the deliverers’ hands, making it easier for them to distribute the mail.

Deutsche Post says it will be watching the pilot project carefully to see how well the robot supports staff with their physically demanding work.

Gerdes says: “Day in and day out, our delivery staff performs outstanding but exhausting work.

“We’re constantly working on new solutions to allow our employees to handle this physically challenging work even as they continue to age.

“We are already using a variety of tools in this regard, including e-Bikes and e-Trikes for postal deliveries, and are now also looking at innovative robot applications.

“This current test is expected to deliver important insights into how we can further develop the delivery process for our employees.”

Bad Hersfeld city council also expects to benefit from the PostBot test, as the vehicle will also be provided to a city employee who distributes the mail between the city’s administrative offices.

Mayor Fehling says he was pleased that Deutsche Post selected Bad Hersfeld for the German premiere of the PostBot.

Fehling says: “We’re a city of manageable dimensions and a dedicated team of city administrators, the kind that can offer a short path from planning to approval.

“The test fits perfectly into our program of Smart City measures – we hope in very concrete terms that the test phase will provide simplified mail distribution between our administrative offices.”

PostBot was custom-built, based on a robot from the French company Effidence, with considerable input from the delivery staff of Deutsche Post to ensure that it met their specific needs for transporting letters and packages.

The robot can carry loads of up to 150 kilograms. Its sensors track the legs of the mail carrier, following behind them automatically throughout the entire route.

It can navigate around obstacles or stop when needed.

PostBot is said to be “robust”, and can be used in all weather conditions.

The control elements have been placed on both sides of the unit to promote good ergonomics for the back and joints.

The test will initially run for approximately six weeks, followed by a period of assessment. Those insights will then flow into another round of tests and improvements, says DHL.