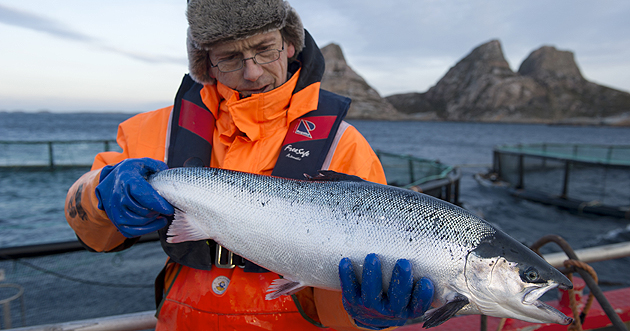 A Norwegian technology research company called Sintef has been developing drones and other robotics technologies to help salmon and aquaculture farmers manage their operations.

In one example, an underwater remotely operated underwater vehicle – often called an ROV – is being utilised to manage a farm which has 200,000 salmon fish.

Salmon and fish farming in general is a huge industry in Norway, which is said to be one of the largest – if not the largest – salmon suppliers in the world.

But in recent years, the salmon supply has been significantly reduced and fish farmers are looking for radical new solutions to maintain productivity.

A rash of sea lice – a parasitic creature – has affected many salmon, and treating this would be expensive. An robotics-oriented solution may help.

In the meantime, salmon supply has dwindled and prices have gone up, exacerbated by the problems in Chile – the second-largest salmon producer after Norway, according to the Financial Times – where salmon harvests have been ruined this year by toxic algae.

Vaccinations have been tried in the past, but as Dr Danilo Lo Fo Wong of the World Health Organisation notes: “Overuse of antibiotics – in farming or for human medical treatment – speeds up the development of antibiotic resistance, which is when bacteria change and become resistant to the antibiotics used to treat infections they cause.”

Norway has reduced the use of antibiotics, especially as it was found to be ineffective against some infections.

As part the ongoing search for cleaner technological solutions, Sintef has been testing an underwater drone to see how it could help. The drone is largely autonomous and manages an area the size of a football pitch.

Back at base, or the farmhouse, the human managers can see a 3D visualisation of what the drone is surveying.

The project was conducted by Sintef as part of MerdRov, and the underwater drone was manufactured by Argus Remote Systems.

Generally speaking, underwater drones tend to be used by oil and gas companies – another big sector in Norway. But such companies require the drone to operate at much lower depths, usually on or near the seabed.

For aquaculture, however, the drones are required at much shallower depths, which has its own hazards, since the vessel is more vulnerable to waves and movements of the water.

Also, the high density of fish can reduce the effectiveness of the drone’s hydroacoustic positioning and communications systems.

“These are challenges we have been working on at Sintef Ocean,” writes Per Rundtop in a company blog. “This is important for the safe and efficient use of mobile robot platforms in the aquaculture environment.

“Existing solutions in today’s salmon farming are highly dependent on manual labor and crew on the mooring.

“The trend has been that the plants move farther at sea, where existing technologies and methods put restrictions on safe operation, with its weather window constraints and poor regularity as a result.”

Sintef has partnered with other organisation, such as Argus and Maritime Robotics, on a project called Artifex, with the aim of developing a robotic system consisting of three drones or crafts.

The system would include an unmanned surface vehicle, which would act as a parent craft.

The project will allow inspection, over and underwater, as well as easier intervention tasks, can be managed from a land based control center without crew at the site, says Sintef.

“The aquaculture industry has many challenges related to lack of accuracy and control in the aquaculture situation,” says Rundtop.

“Despite this, only a minimum of technological solutions are available today that can assist in bringing the fish through the production cycle into the sea, and within several areas the production process is suboptimal.

“Key variables such as feed mode and feed play, the number of fish, average weight and growth, sleep state, and health condition are either inadequate control or the accuracy and level of detail in both room and time are not satisfactory.”

This is why Sintef has established the CageReporter project. The idea is to include autonomous and wireless underwater vehicles, as carriers of data capture sensor systems to report continuously about the status of the fish and production environment.

An autonomous underwater vehicle will be used in each cage that will be resident – underwater docking – for 24-hour surveillance.

Throughout the project, autonomous functionality, low cost technology for naval navigation, subsea communication and camera and computer systems will be developed.

One of the main objectives of the project is that the autonomous underwater vehicle should be biointeractive, says Rundtop.

That is to say it should find solutions on how to operate with the fish and obtain information about the behavior of the fish, and be able to provide information on health and feeding behavior.

Sintef has been working with underwater GPS provider Water Linked, as well as SeaLab, a specialist supplier of machine vision and underwater sensor systems.

“The project was launched in the summer of 2017 and will be completed in 2019 with a demonstration in full-scale farming,” says Rundtop.