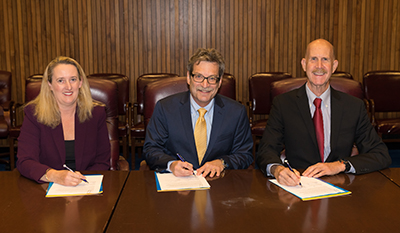 RIA is the main industrial robotics association in the US and was established in 1974.

The new group will be called the OSHA/NIOSH/RIA Alliance, and it will focus on communication and education about best practices in robot safety, according to a statement.

Jeff Burnstein, president of RIA, says: “RIA has a long history of helping to keep around industrial robotics.

“We developed the first American national robot safety standard, R15.06, in 1986 and we’ve kept it up-to-date since then.

“This new alliance with OSHA and NIOSH will help us to continue advancing worker safety as more robots enter the workplace.”

Industrial robots used to be caged off well away from human workers in factories in the past.

But as a new generation of collaborative robots becomes more widely used, humans are increasingly working alongside robots – without the cages of old.

The new organisation says it plans to improve awareness of the hazards relating to this new human-robot collaborative environment and identify areas where research is needed to help reduce the hazards.

Its findings and information will be shared among RIA members, OSHA, NOISH, employers and workers. And technical training and other resources and tools are also planned.

Carole Franklin, director of standards development, RIA, says: “The robotics industry has a great track record of safety dating back to 1961 when the first industrial robot was installed.

“We’re trying to make sure every integrator and user of robotics in the country is aware of the best practices described in our R15.06 standard.

“This new partnership with OSHA and NIOSH will certainly help us in that effort.”