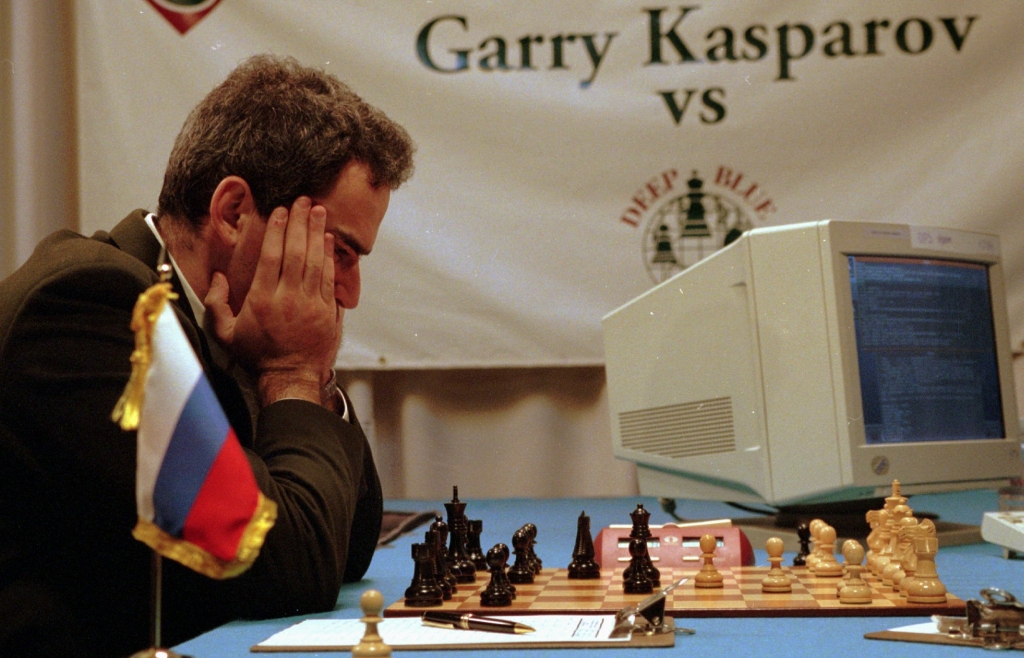 With so many people voicing their fears about a future world in which artificial intelligence not only influences our day-to-day activities, but also makes life-or-death decisions in security and defence scenarios, there is arguably no one more qualified to comment on the issue of man versus machine than Garry Kasparov.

For younger readers who may not know who Kasparov is, he is probably the most celebrated and most controversial chess grandmaster there has ever been.

Back in the days when the Cold War as at its height, and the then USSR and the US were constantly on the verge of wiping humanity from the face of the Earth, Kasparov took on the very icon of American power, IBM, and what was at the time its most powerful supercomputer, Deep Blue. It was the first time such tests were conducted in such an internationally high-profile way.

Back then, most countries just had a few television channels, and websites were not even a figment of the imagination. So the story about Kasparov against the machine made global headlines for years.

While it would be unfair to say Kasparov is bitter about his losses to Deep Blue, the confrontation still rankles with him, as evidenced by the fact that he pointedly reminds people that he comprehensively beat the machine the first time round, when it was called Deep Thought.

Six years later, Deep Blue came along and although Kasparov still won the match, the computer managed to beat him in one of the games.

In the following year, in 1997, Kasparov lost to Deep Blue in a match which was widely said to be a turning point – the moment when machines were shown to be superior to mere humans.

It would be unfair to say Kasparov flew into a rage, since being a chess grandmaster, he’s likely primarily a cerebral being, not given to emotionalism as it’s not always useful when analysing things, but by those standards, he did. Anyway, he doesn’t come across as a cold, calculating, stereotypical intellectual type.

There have been many documentaries made about Kasparov’s battles with IBM. They were each considered an historic juncture at which it would be witnessed by the world whether machines were better than, or perhaps preferable, to humans – or at least could beat the best human players at chess. But the film I saw showed Kasparov’s disgruntlement with what he suggested was a missed opportunity.

But all that is to delve into the details about a time and place that some readers won’t relate to, may find obscure and historical, as it was all a very long time ago, and people always want to know about the here and now.

And anyway, Kasparov is more philosophical about it these days. Mostly.

Having said that, he’s still apparently reluctant to assign the “I” in AI as “intelligence”, definitively. Even though he emphasises the word “is”, it seems as though he is trying to convince himself.

In an exclusive interview with Robotics and Automation News, when asked whether people’s fears about artificial intelligence are well-founded, Kasparov says: “It’s a question of philosophy. So, first, we have to understand how the mind works.

“It is a form of intelligence because it makes decisions. But I don’t think it’s the kind of intelligence that will threaten humans because there will be vast territory based on emotional response and other pure human instincts and qualities that will leave us room for creativity.

“But this is a big debate that goes beyond technology.”

Kasparov is not generally known for being reticent or reluctant to give his opinions.

As well as having some sort of interest in politics in his native Russia – for which he has been seen in the news being arrested at demonstrations and being carted off in the back of police vans – he also often writes long articles about the “man versus machine” debate, and the most recent one is published in Fortune magazine.

He’s had to accept that, in some ways, the machine cannot be beaten. “Deep Blue could look at 200 million chess positions a second, while I was limited to two or three,” he writes.

But what used to be called lateral thinking, or thinking outside the box or envelope, as some people call it, is really what Kasparov appears to be fascinated by: What is it about the approach to chess, the broader strategy, that can help him win against a machine that clearly no human can compete with when it comes to pure number-crunching?

How could he have remained world chess champion forever?

What is it about chess?

Even Kasparov accepts that to some extent.

The machines are learning at a rate which will almost certainly result in the reduction to calculations and algorithms of all human emotions and instincts to the nth degree.

But Kasparov, girded with joviality, still holds on to the idea that there are “some decimal places” to which the computer will not be able to go, and humans can rule there.

Even as Google’s DeepMind computer beats the world’s best human Go player at his own game, there are many who still believe that there are qualities of human intelligence that artificial intelligence will not be able to compute.

And besides, chess is Kasparov’s game, and having been the world’s best player from 1986 to 2005 – the longest time anyone has held that position – he’s clearly not going to give up to some zeros and ones any time soon.

He speaks as though he almost invented the game, as though it were his brainchild. Not surprising since he started playing chess since before the age of 10 and won the Soviet Union Junior Championship at age 12, and qualified to play in the senior national Soviet Chess Championship at age 15, the youngest ever player at that level.

Now, he travels the world and gives lectures on technology. While not hostile to artificial intelligence, Kasparov says on his website: “AI will transform everything we do and we must press forward ambitiously in the one area robots cannot compete with humans: in dreaming big dreams.

“Our machines will help us achieve them. Instead of worrying about what machines can do, we should worry more about what they still cannot do.”

And he says chess is a “unique” gateway to understanding human, as well as artificial, intelligence.

“Why is chess such a unique opportunity to test AI?” he asks, before going on to answer his own question. “Because if we start exploring AI, we can come up with more than 50 different broad rules of what it is, so we still have to agree a definition.

“Then we have to start defining the I – intelligence.

“And essentially, chess was seen as the nexus of human thoughts, where you can actually to find out some clues about the way humans make decisions.”

He points out that, from the 19th century onwards, the scientists who invented the intelligence quotient, or IQ, tests have been studying the brains of chess players to find out how intelligence works.

Now, he says, computer scientists and experts in many others fields are also looking at chess as the gateway to understanding how the human mind works and seeing it as the game which provides the true test of whether we have arrived at the dawn of artificial intelligence.

In 1985, Kasparov played 32 separate games against 32 different specially-design, specifically programmed chess-playing computers, built by a variety of companies – simultaneously. And he won all the games.

So, it’s probably understandable that he is convinced that humans have the creativity and ingenuity to compete against the machines, especially as he went on to win against the IBM supercomputers – only losing some games when the machine was secretly being aided by his arch-rival Anatoly Karpov, allegedly.

But Kasparov says it’s the sheer brute force calculating ability of computers that humans cannot match: “Machines are better at 85, 90, 95 per cent or even more of that territory.

“The trick is that you don’t have to go there. You have to compensate for the remaining 10 or 15 per cent or whatever it is.

“It’s all about finding a spot in the last few decimal places.

“It may sound depressing, but at the end of the day, you are faced with such massive power that it’s important you channel your energies in the right areas and directions.”

The reality is that machines make fewer mistakes and that is the big differentiator, says Kasparov.

So if a human is competing against a machine on those terms – on number-crunching and consistency – there’s only likely to be one winner, and it’s not likely to be the one who needs food and water.

Meaning it’s up to humans to formulate and ask the questions. “Those last few decimal places,” says Kasparov. “It shows that there is still room for us to channel this massive power.”

And another crucial shortcoming of computers, adds Kasparov, is that they “confuse correlation with causation”.

Computers and artificial intelligence, meanwhile, cannot yet perform such expansive analysis of disparate sources and information adequately, and certainly cannot be relied upon to do so in critical situations, argues Kasparov.

“So, human logic, human understanding, and our ability to combine information tells us that, no matter what happens, we will always rule – for human questions, for human creativity, for human relations and human leadership.”