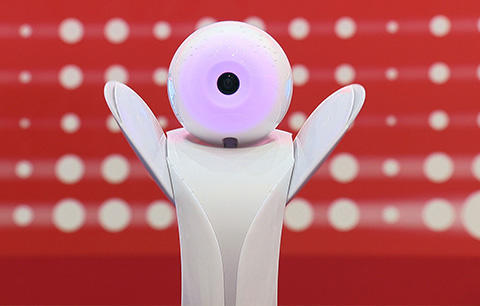 Fujitsu is showcasing a number of enterprise innovations at Oracle OpenWorld 2017.

Highlights include an executive solution session with Goro Watanabe, executive vice president, Fujitsu America, on the latest advances in artificial intelligence for business.

The new, interactive talking robot uses Human Centric AI Zinrai, which is the Fujitsu approach to artificial intelligence, to learn and analyze human emotions based on such factors as tone of voice, while using a camera to recognize emotions and faces.

The resulting analysis allows it to generate suggestions based on specific interests. The robot will be used for consumer and industrial purposes such as at reception desks, care facilities and other service jobs.

It has achieved a natural level of conversation thanks to cloud technology that stores data from conversations.

In addition to its use in the robot, the Fujitsu Zinrai AI platform will also be demoed in a more general display at the booth to highlight its business innovation capabilities.

Along with the other AI solutions, booth visitors can learn about a quantum-inspired AI cloud service, which combines Fujitsu digital annealer and 1QBit software to enable advances in machine learning and large-scale optimization problems.

The booth will also include demos of the Fujitsu Sai Anomaly Detection Engine, which detects anomalies in factory operations for real-time failure prediction.

There will also be a cut-model of the new Fujitsu Sparc M12 server to show off its innovative Vapor and Liquid Loop Cooling feature and the high performance Sparc 64 XII processor.