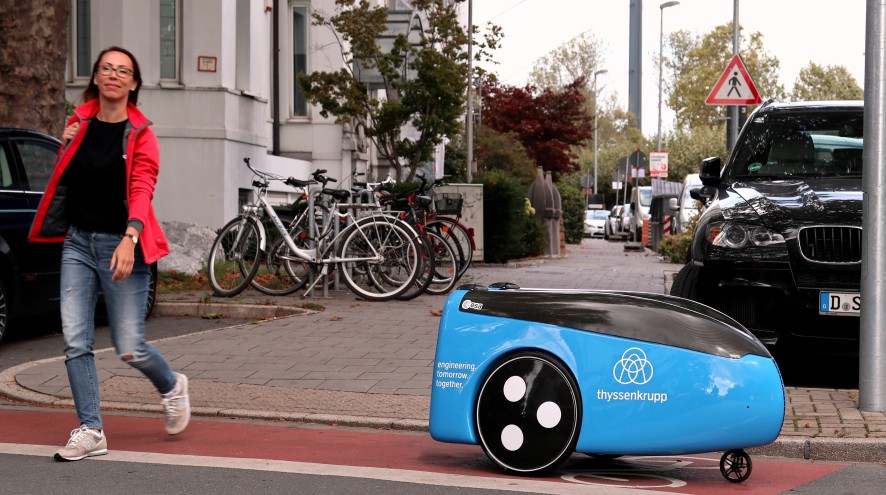 ThyssenKrupp is testing delivery robots as part of a research project.

The robots were displayed from at the IAA Frankfurt Motor Show, where ThyssenKrupp participated as an application partner of TeleRetail.

ThyssenKrupp is convinced self-driving vehicles will be a normal part of street scenes in smart cities of the future, whether moving people or goods.

The company says these autonomous vehicles promise greater efficiency, safety and smoother logistics, particularly when it comes to delivering goods, and the effects will be clearly visible.

Instead of bulky vans, compact delivery robots will ensure that packages get to their destination by the quickest route possible, says the company.

TeleRetail is developing driverless delivery vehicles like these, and for ThyssenKrupp Elevator they could be an optimal logistics solution for elevator servicing.

Together with the software developer TeleRetail, ThyssenKrupp launched a pilot project in which delivery robots will transport spare parts and other material to maintenance job sites.

For elevator and escalator servicing, spare parts are needed quickly and a technician either has to drive back to base in his service vehicle or have it delivered by a colleague.

But with increased traffic clogging up city streets, the pressure on supply chains is increasing all the time.

Ivo Siebers, senior vice president of global logistics at ThyssenKrupp Elevator, says: “This is a challenge of urbanization that our service technicians are already experiencing today.

“With driverless delivery robots we could fill a gap and get spare parts from our warehouses to the job site faster, more flexibly and with less impact on the environment.”

ThyssenKrupp sees many advantages to using the autonomous vehicle.

The delivery robots are just 85 cm wide and suitable for traveling on sidewalks, thereby avoiding road congestion, it says.

They can also reach inner-city areas where vehicular transport is limited and carry payloads weighing up to 35 kg.

Information on delivery status can be obtained quickly via an online Logistics Automation Platform.

Siebers, says: “We hope to improve our service delivery in this way.”

Torsten Scholl, CEO of TeleRetail Mobility Automation, says: “With our platform we want to optimize logistics by saving time and costs, and minimizing space requirements, energy consumption and emissions.”

TeleRetail took part in this year’s IAA Frankfurt Motor Show where two of the delivery robots – one branded in ThyssenKrupp blue – were on display.

ThyssenKrupp also presented new developments in the chassis area such as electric powered steering, steer-by-wire and adaptive damper systems that are paving the way for more automated and autonomous driving.

In particular, ThyssenKrupp focused on high-performance materials for electric motors and newly developed production lines that allow bodies, powertrains and batteries to be manufactured more quickly and at lower cost.