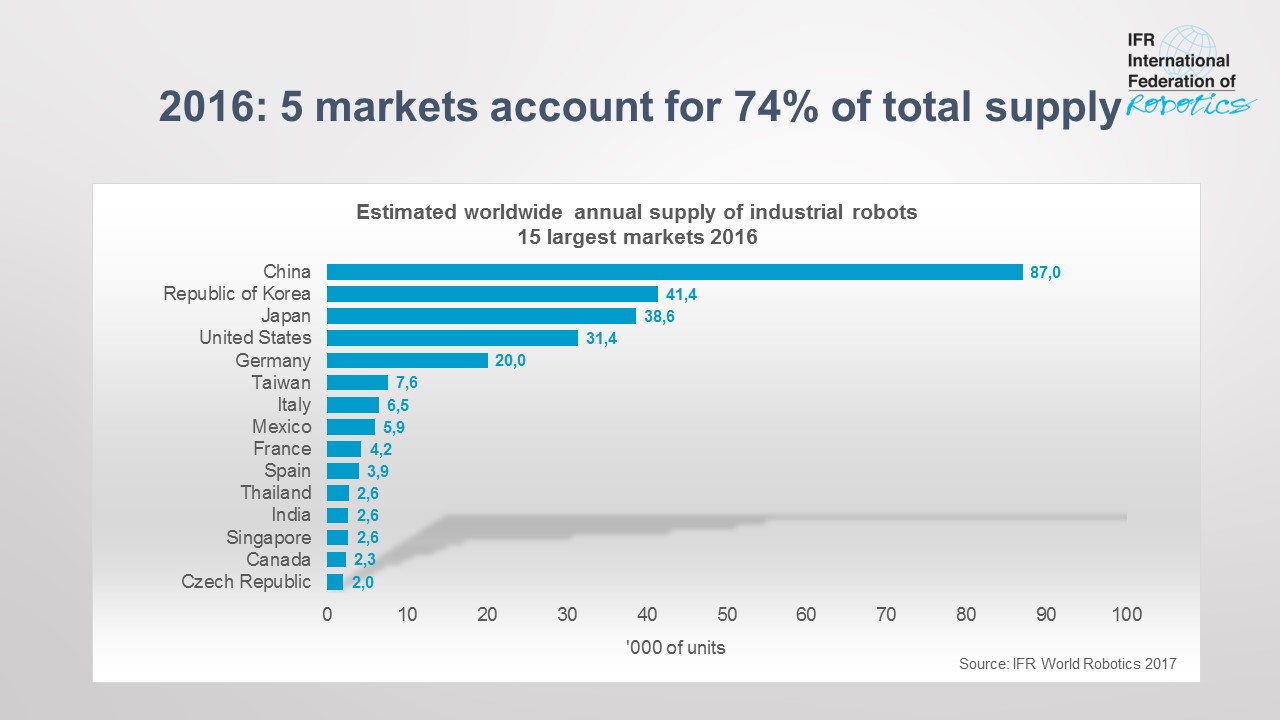 Purely ceremonial, since some people say they already rule over us anyway.

According to the International Federation of Robotics, by 2020, there will be an additional 1.7 million new robots in the world’s factories, ostensibly just to do a variety of work and at the same time as pretending not to be interested in taking over the planet.

The IFR confirms China as the world’s largest market for industrial robots, with the Asia-Australasian region expected to increase its purchases of the machines by 21 per cent this year compared to 2016.

The IFR further predicts robot supplies will increase by 16 per cent in the Americas, and in Europe by 8 per cent.

The most important drivers of these increases in sales of robots include are:

The IFR says many of these new drivers – often collectively called “mass customisation” or “smart manufacturing” – will require “a new generation of industrial robots”.

Collaborative robots, or cobots, are part of that new generation.

Traditionally, industrial robots tended to be caged off, well away from humans, even if they are in the same factory.

Collaborative robots are smaller, more lightweight, and specifically designed to be safe for humans to work with in a collaborative fashion, much like any other power tool.

Cobots are a relatively new innovation, and have been around in large numbers for less than five years, whereas traditional industrial robots have been working away for around half a century.

New computer technology – principally an increase in computing power in smaller chips – is one of the many reasons why it is possible to build collaborative robots.

Now, with The collaborative robot has seen massive growth in the past year or two, and is expected to continue on the same exponential growth trajectory.

Most of the big industrial robot manufacturers have now released their own collaborative robots, and a variety of additional innovations are likely in the next few years because of artificial intelligence and deep learning systems, as well as the continual decrease in the size of computers – even as they become more powerful – and the corresponding decrease in cost: the so-called Moore’s Law.

Joe Gemma, president of the IFR, says: “Robots offer high levels of precision and their connectivity will play a key role in new digital manufacturing environments.

“Increasing availability enables more and more manufacturers from companies of all sizes to automate.”

This represents an average annual growth rate of 14 percent between 2018 and 2020.

In Australasia the operational stock of robots is estimated to increase by 16 percent in 2017, by 9 percent in the Americas and by 7 percent in Europe.

Since 2016, the largest number of industrial robots in operation has been in China.

The Japanese robot stock will slightly increase in the period between 2018 and 2020.

About 1.9 million robots will be in operation across Asia in 2020. This is almost equal to the global stock of robots in 2016.

Top five markets in the world

With sales of about 87,000 industrial robots China came close to the total sales volume of Europe and the Americas combined (97,300 units).

Chinese robot suppliers continued to expand their home market share to 31 percent in 2016.

Top 5 markets in the world

South Korea is the second biggest market in the world. Due to major investments by the electrical and electronics industry in robots, annual sales increased considerably.

This is a rise of 8 percent compared to 2015. South Korea has the highest level of robot density in the world, about 630 robots installed per 10,000 employees in the manufacturing industry in 2016.

Korea is a market leader in LCD and memory chip manufacturing.

The driver for this continued growth since 2010 was the ongoing trend to automate production in order to strengthen the competitiveness of American industries in overseas markets.

Investments have been made to keep manufacturing at home, and in some cases, to bring back manufacturing that had previously been relocated overseas.

Due to this dynamic development, the robot density in the US increased considerably – in particular in the automotive industry.

With a density of 1,261 installed robots per 10,000 employees the United States ranked second in 2016 after the Republic of Korea. Most of the robots in the USA are imported from Japan, Korea and Europe.

Germany is the fifth largest robot market in the world and by far the largest in Europe.

The annual supply and operational stock of industrial robots in 2016 had a share of 36 percent and 41 percent respectively of total robot sales in Europe.

As obstacles like system complexities and data incompatibility are overcome, manufacturers will integrate robots into factory-wide networks of machines and systems.

Robot manufacturers are already developing and commercializing new service models: these are based on real-time data collected by sensors which are attached to robots.

Analysts predict a rapidly growing market for cloud robotics in which data from one robot is compared to data from other robots in the same or different locations.

The cloud network allows these connected robots to perform the same activities. This will be used to optimize parameters of the robot’s movement such as speed, angle or force.

Ultimately, the advent of big data in manufacturing could redefine the industry boundaries between equipment makers and manufacturers.

Simplification is a key trend for this market segment.

The ongoing need for robots which are easier to use and to program and the increasing need for ever more flexible automation initiated the development of smarter solutions.

This is especially useful for industries with a lack of specialized production engineers in-house.

So, it is important to provide easy-to-use robots that can easily be integrated into and operated in standard production processes.

Robots that are uncomplicated to use will enable the deployment of industrial robots in many industries to sustain efficient and flexible manufacturing.