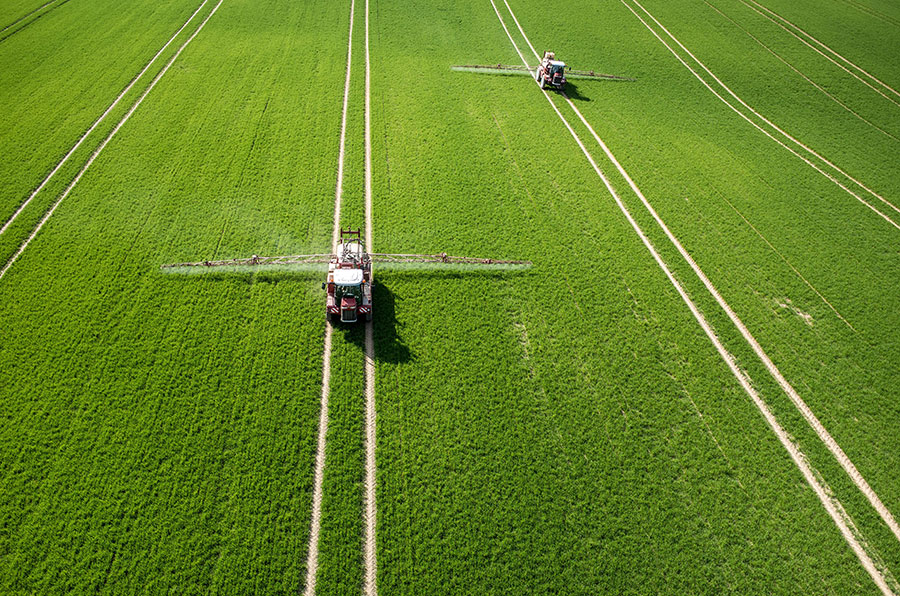 Industrial giant Bosch is teaming up with Bayer, one of the world’s largest biotech companies, to develop precision agriculture systems which they say could help improve harvests by 50 per cent.

Precision agriculture is a term that refers to the increasing use of technologies such as drones, robots, computers and data analytics in farming. These technologies essentially help farmers micro-manage their farms. Other terms used include smart agriculture and even Agriculture 4.0, but they refer to the same thing.

The United Nations’ Food and Agriculture Organization estimates that farmers around the world will need to increase yields – the volume of crops they harvests – by 50 per cent by 2050 in order to feed the increasing global population.

Bosch and Bayer have entered into a three-year research partnership which they say will develop smart spraying technology that makes the use of pesticides more efficient, among other things.

While pesticides remain controversial, they are essential in preventing the loss of large amounts of crops to diseases and pests.

But whereas previously, pesticides were generally sprayed all over fields of crops, now more companies are looking into how they can find ways to spray only the crops that are affected by disease and pests.

This would not only reduce the amount of pesticides and their potential harmful effects in the food chain, the reduction would save significant amounts of money.

In the fields, crops like corn and wheat compete with weeds for water, nutrients, and a place in the sun. The result is often poorer harvests.

In order to combat these undesirable plants efficiently, the large-scale use of herbicides is usually the only remedy at present, even though weeds do not always grow evenly throughout the field.

The result is that crops and arable soils are also sprayed with pesticides – and that can be bad for the environment.

Tobias Menne, head of digital farming at Bayer, says: “Together with Bosch, we want to break new ground by combining different technologies. Our aim is that herbicides are only used where they are really needed.”

Especially in the early phase of their growth, weeds are hard to identify. Using camera sensors, the new smart spraying technology is able to differentiate between crops and weeds, and uses special application technology to target weeds with pesticides, thus reducing environmental impact.

Dr Johannes-Jörg Rüger, head of Bosch’s commercial vehicles and off-road unit, says: “With smart spraying, we are bringing more intelligence to the fields.

“What sets it apart from previous systems in the market is that they only provide “green detection,” but cannot distinguish between crops and weeds.”

The way the system works is that, before farmers drive out to their fields, a digital “field manager” helps them to assess the situation in the field and recommends the best time to treat weeds.

In one step, weeds are precisely identified and pesticide is sprayed in a single process as the crop sprayer crosses the field.

Multiple cameras spread across the entire width of the crop sprayer take a continuous series of pictures, identifying the different weeds and allowing the optimum treatment to be defined.

While the crop sprayer is still crossing the field, the herbicide is sprayed in the required quantity and mixture using the appropriate application parameters.

While the relevant weeds are targeted, weedless areas remain untouched. All this occurs at lightning speed, within milliseconds.

Björn Kiepe, head of agronomy at Bayer’s digital farming unit, says: “Smart spraying is a quantum leap in the fight against weeds.

“We are combining modern weed identification technology with the ability to apply different active substances as the situation demands.

“This process is very precise, with a spatial resolution of well under one meter. This will make it even easier for farmers to practice sustainable crop protection.”

Most importantly, the system takes account of pretreatments, the interaction of different active substances, and the best possible degree of efficiency of the herbicides being used in order to prevent weeds from developing resistance.

In its partnership with Bosch, Bayer is applying the experience it has gained in the fields of geographic information systems – including the development of algorithms as a basis for making agronomic decisions – integrated crop protection, formula technology, and application technology.