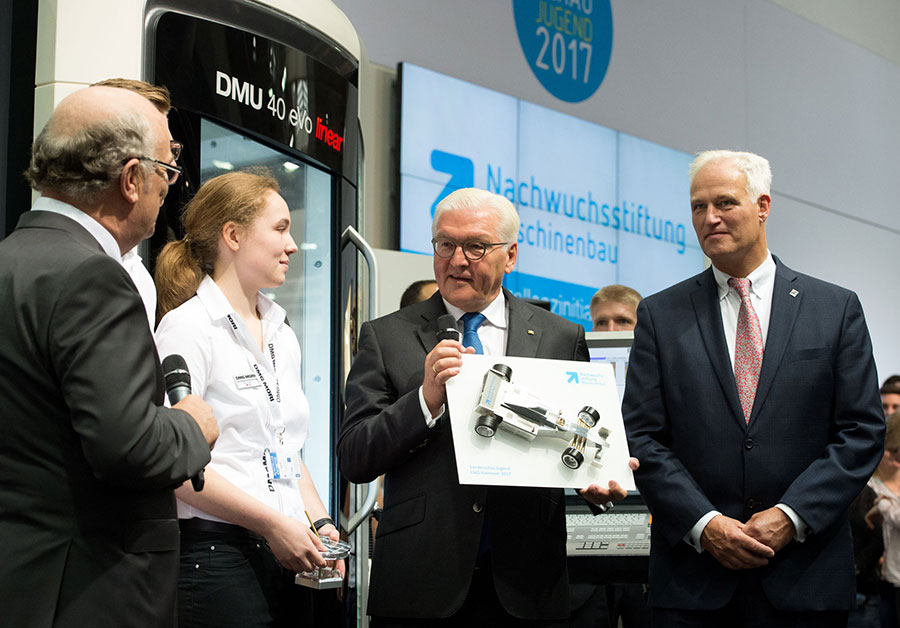 The annual showcase for metalworking, EMO Hannover, has been ceremonially opened by President FrankWalter Steinmeier.

In his opening remarks, Steinmeier (main picture, centre) said: “An open society and prosperous economy rest on a foundation of communication and trust.

“Trade fairs like EMO embody this in a concrete and tangible way. Fortunately, this tradition continues to flourish, even in an age of digital catalogs, video conferences and just-in-time production.”

EMO is said to be the world’s leading trade fair for the metalworking sector, and is attended by more 50,000 people over its five-day duration.

More than 2,200 exhibitors – a new record – from at least 45 countries are taking part, and some 60 per cent of them are from outside the host nation.

Some the notable companies who are showcasing their technologies this year include:

A lot of the buzz is about additive manufacturing, or 3D printing, as well as connectivity networks, or internet of things networks.

3D Systems is the company that is often credited with the invention of 3D printing, which may have been seen as an interesting novelty at first.

But these days, 3D Systems counts among its customers most if not all the leading aerospace and automotive manufacturers.

Wibu-Systems is demonstrating how connected systems for intelligent production can result in new revenue streams, and explaining its CodeMeter software development platform.

Digitalisation has led to huge and entirely new revenue streams for many companies, and has helped them save vast sums through more efficient operations.

And yet, the technologies and the way they are implemented can still be a complex process for some companies, and a lot of them are wary of the security implications of connecting systems to the internet, thereby making them potentially vulnerable to hacking or viruses.

Ruediger Kuegler, VP sales and security expert at Wibu-Systems, provided an overview of these issues, while expressing a positive attitude to the idea of connectivity.

Kuegler says: “We live in exciting times, as computational power, cloud storage, and security technologies have reached the capability and pricing point to transform our world and can now offer a plethora of automated, digital, and tailored services.

“Expanding our imagination is our next frontier.

“Following the same pattern, CodeMeter, our protection, licensing, and security technology, is becoming more sophisticated and convenient every day and providing an optimal effort-performance relationship”.

One of the most successful providers of additive manufacturing solutions, Renishaw will be presenting its latest software and systems for metal part production.

The company is also demonstrating how to integrate its latest measurement technologies within intelligent machining processes.

The company says this is a “critical approach” to companies that want to exploit the full benefits of Industry 4.0.

The industrial sector has been for the longest times been associated with tools and machines that produce physical objects, with barely a mention of data.

But now, in the era of Industry 4.0, it’s almost all about the data.

Physical still get made – that’s the ultimate aim. But the way they are produced now is heavily dependent data, often stored in the cloud and shared across an entire industrial company, even if it spans many countries.

TDM Systems is showcasing its TDM Cloud Line at the event, and claims it is “the world’s first cloud-based solution for tool data management”.

The key advantage of TDM Cloud Line is that users can download and manage data from thousands of tools without having to purchase them.

The solution can test alternative tools during the product design process and select the optimum tool for the specific design.

Peter Schneck, CEO of TDM Systems, says: “The quality and availability of tool data are crucial to the success of metal-processing companies. Our cloud-based solution marks the start of the digital transformation for users.”

Other notable companies include Heimatic, which is launching a range of new products, including a sensor system for driven tools.

The system can measure a variety of things such as revolutions per minutes, temperature and humidity, and operating time.

But, as mentioned, there are around 2,200 companies at the event, so there are likely to be many others worth highlighting.

This year’s theme for EMO is “Connecting systems for intelligent production”, which the event’s general commissioner, Carl Martin Welcker, is clearly pleased with.

“With our new motto, we’ve certainly hit the bulls-eye with our exhibitors,” he says. “Numerous firms can identify with this slogan, and will be showcasing their solutions in the field of Industry 4.0 either on their own stands or in the Industry 4.0 Area.”