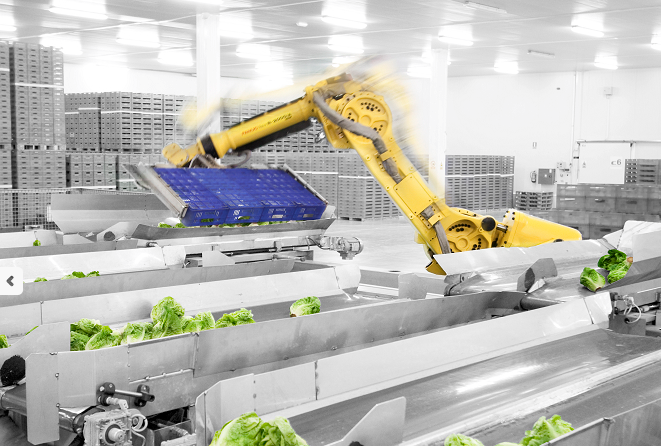 Spanish farm produce supplier El Dulze has reduced its human workforce from 500 down to just 100 with the use of robots, according to a report on FruitNet.com.

The company is said to be using Fanuc robots – LR Mate 200iB models – which use vision systems to even out the production line so the vegetables are not bunched up too close together for packing.

The robots also appear to be picking heads of lettuce and placing them in containers, or plastic packaging.

A total of 68 robots have been installed at the El Dulze facility in Murcia, and they process approximately 550,000 heads of lettuce every day.

The robotic system is also said to have reduced rejects from 20 per cent to 5 per cent, mostly due to improvements in hygiene and handling.

Managing director José Sánchez is quoted by FruitNet.com as saying: “This business has traditionally been labour intensive but today labour is increasingly unavailable.

“This region has a major shortage of labour – many workers in the industry are immigrants but this hasn’t solved our problem.

“As minimal skill is needed we have a real problem with labour and turnover of these workers is high – they just seem to come and go.

“Reducing the amount of people has made everything more hygienic and damage to the lettuces caused by handling is now minimal.”