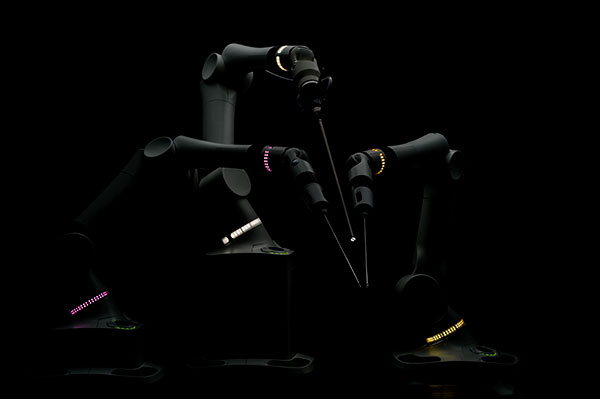 The release of the photographs marks a major milestone, says CMR, which aims to make minimal access surgery available to all the estimated 6 million people a year who could benefit and make it easier for laparoscopic surgeons to learn and perform the technique.

Versius was designed to be lightweight and easy to set up. The robotic arms measure their position and force thousands of times a second, making them safe to be around and easy to manoeuvre even during surgery.

The arms and wristed instruments give maximum flexibility to surgeons during a procedure.

CMR says this “ground-breaking design” allows the arms to work in a way that reduces physical and mental effort for the surgeon whilst giving them the ability to undertake more procedures on patients.

Versius – as suggested by the name – has been designed to be inherently versatile, with the capability to operate across all four surgical quadrants, allowing it to be used in gynaecology, urology, upper gastrointestinal and colorectal surgery.

Martin Frost, CEO of CMR, says: “We’ve designed Versius with surgeons in mind. By equipping them with a remarkable tool, fit for their demanding job, we can change the way surgery is delivered.

“Having operated in stealth mode for the past three years, I am delighted to be able to show what our amazing team has managed to develop in such a short period of time.”