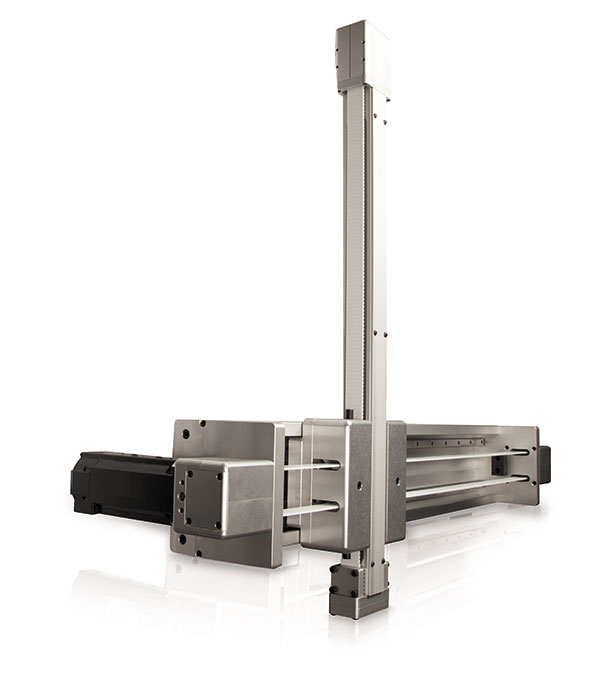 Employing what the company says is “a one-of-a-kind two-axis system”, the unit features a single continuous belt that serpentines around the two axes eliminating the need for a motor in the Z- or Y-axis while driving a pair of coordinated motors in the X-axis.

These configurations, known as T-bot and H-bot within the industry, permit synchronized control for complex motion movement profiles such as circles, ellipses and sine waves.

IntelliAxis is intended for medium and heavy-duty two-axis industrial applications that require flexible motion within a two-dimensional plane.

An optimal solution for applications that require X-Y or X-Z distance, high-speed motion with a robust load and moment loading capacity, IntelliAxis is configured for pick and place, sorting, loading, assembly and other material handling tasks in industries such as packaging, food and beverage and automotive.

IntelliAxis product manager Ed Long says: “With these new actuators, users will realize significant cost savings. The thrust and torque of both X-axis motors converge to provide twice the thrust of a single motor in the Z-axis while the absence of a motor in the Z-axis eliminates the need for cable tracks and expensive, flexible cable.”

Also, says Long, “a 3-axis gantry can be created simply with the addition of a single axis actuator for applications requiring 3-dimensional motion”.

The patented ARC Power Self-Tracking timing belt itself is steel-reinforced and provides motion in both axes.

It is constructed to reduce noise and vibration, eliminate backlash and cogging and deliver higher thrust per unit size.

“Ideal for high-speed applications, it is the most innovative and efficient timing belt in the world,” says Long.