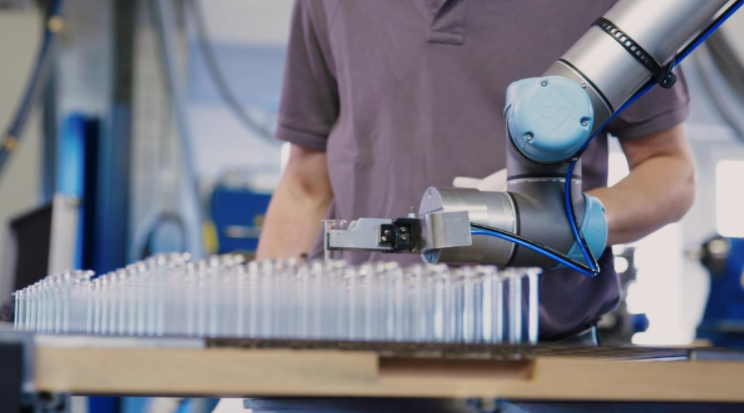 The Universal Robots machines are tasked with picking and placing highly sensitive glass tubes into a forming machine.

This relieves the family-owned company’s human employees from what is one of the most repetitive and monotonous tasks in the facility.

Hofmann is said to be one of the largest industrial glassblowing companies in Germany, and was looking for ways to make better use of their employees’ potential and aimed to optimize its production processes.

The first thing it thought of was to automate repetitive, manual tasks.

As a result, says Hofmann, the production process has been stabilized, the quality of the glass components has been improved significantly and the employees have been effectively relieved from monotonous tasks.

The specific plan was to automate the monotonous task of tending a glass lathe, to deploy skilled workers in more sophisticated and complex jobs and to improve the production processes.

The company’s managers decided the robots should be able to handle delicate glass tubes, which requires a very high level of precision. So, the managing director of Hofmann, Robert Hofman, decided to install two robots from Universal Robots.

Hofmann says: “Glass products are extremely delicate. Even the tiniest fluctuation in temperature of the instruments has an effect on the outcome. In the past, our workers tended the glass lathes themselves.

“Interruptions in the process, even for a short time, meant that the machines cooled down repeatedly.

“Using the collaborative UR robots for the first time for this task, we achieved excellent results.”

The two robot arms UR5 and UR10 work at several CNC glass lathes. They tend the machine for up to 11 hours each day. If required, the company can flexibly implement the robots at different glass lathes.

The company has developed a facility which allows them to switch the UR robots between the different machines with “no problems at all”.

The robots are immediately ready for operation after the set-up has been changed in this way.

Björn Uthe, department manager machine park at Hofmann, indicates he is also convinced by the usability of Universal Robots.

Uthe says: “Handling the UR robots is very intuitive. Once you have understood the procedures and functions involved, literally anyone can operate the robots.”

The robot arms also lighten the work load for the skilled workers at Hofmann.

Uthe says: “The UR robots have made our work so much easier.

“We used to have to move backwards and forwards between the glass lathes, parallelly feeding them all day long.

“We could hardly keep up with the production. With the UR5 and UR10 working with us now, I can spend more time on setting up the machines.”

By using the flexible robot arms, Hofmann is not just able to deploy its skilled workers in more sophisticated and complex jobs but also to stabilize its production processes and to reduce downtimes.

Due to that, both the quality of the glass components and the efficiency of the company have been improved significantly.

So the company was able to increase its production capacities in the specific application area by 50 percent and the original investment in the robots was paid off in around six months.