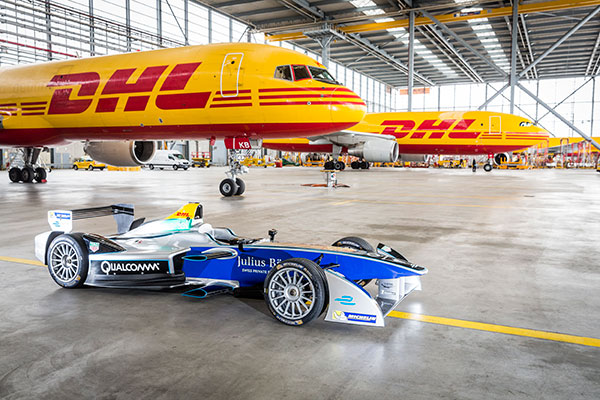 Logistics giant DHL called on the Effibot autonomous vehicle to help with the logistics demands of delivering all 40 fully-electric racing cars which took part in the recent Formula E Championship decider in Montreal, Canada.

Along with the cars, DHL also delivered lithium-ion batteries, charging stations, garage equipment and track infrastructure for the 10 teams that will compete for the title.

With the season finale, DHL also concludes its third season of delivering logistics solutions for the only fully single seater electric car racing series around the globe.

Since last October, when the Championship’s tour kicked off in Hong Kong, DHL has transported more than 450 tons of equipment, covering more than 50,000 kilometers as the series traveled to eight countries on five continents.

The cargo for the North American races traveled from Europe to New York City via ocean freight, which produces 100 times less CO2 emissions than transporting the same cargo via air.

For the trip to Montreal from New York City, DHL transported the cars and all the equipment via road.

Andrew Williams, CEO, DHL Express Canada, says: “With the FIA Formula E Championship, DHL, a pioneer in green logistics, is working alongside a pacesetter in clean auto racing with a vision to advance automotive technology at large.

“Handling the logistics for this championship presents a great opportunity to showcase how the transport of all the equipment needed to stage this great event can be done while minimizing the carbon footprint of the entire operation.”

Away from the track, DHL says it is trying to establish itself as an “environmental protection leader”, and the Formula E Championship provides an interactive platform to help promote the importance of sustainability.

Earlier this year, DHL announced its goal of eliminating all logistics-related emissions by 2050.

To achieve this, DHL will complete a series of milestones that will gradually contribute to the final goal.

By 2025, the company will operate 70 per cent of its own first and last mile services with clean pick-up and delivery solutions such as bike and electric vehicles.

DHL has significantly ramped up the production of its StreetScooter, an electric delivery van originally designed for its Deutsche Post operations in Germany.

Some 20,000 units are scheduled for production this year for use by the German mail and parcel unit as well as for sale to third parties.

DHL had also set a target to improve its carbon efficiency by 30 per cent by the year 2020 from its benchmark 2007 level.

DHL claims it achieved this goal in 2016, three years ahead of its original target date in part because of the steps the company has taken in its daily operations to reduce its overall carbon emissions.

For instance, DHL Express in Canada uses more fuel-efficient vehicles. DHL operates an entirely green fleet in New York City with 49 fully-electric vans and 47 hybrid units in New York City and two weeks ago it introduced its Cubicycle, an innovative electrically-assisted delivery bike that can carry a container with a load of up to one cubic meter in volume, making carbon-free deliveries.

With an emphasis on sustainable logistics, DHL believes in the importance of innovative technology to accelerate the path to greener solutions.

During a press event on Thursday, July 27 at the W Montreal, and using mixed reality technology, DHL showcased innovations being piloted in its operations, such as the DHL Parcelcopter, which makes deliveries in remote and dangerous places, and Sawyer, one of its four new collaborative robots to support production and warehouse staff by automating repetitive tasks.

Augmented and mixed reality technology provides new perspectives in logistics planning, process execution and transportation and is currently being piloted in DHL operations.

DHL “pickers” are equipped with advanced smart glasses that visually display where each picked item needs to be placed on the trolley. It enables hands-free order picking at a faster pace, along with reduced error rates.

This technology has enabled a 25 per cent increase in the performance of warehouse operations in the US, the Netherlands and the UK, says DHL.

At the Montreal Formula E track tour, DHL also showcased the Effibot, a new, fully-automated collaborative robot that follows pickers through warehouses and takes care of most of the physical work.

Effibot is manufactured by a company called Effidence, which is partnering with DHL on robotics technology.

DHL’s Effibot has accompanied the staff, and fans alike, around every Formula E race this season, helping deliver necessary parts and materials to the racing teams and the Formula E staff as they get race-ready trackside.