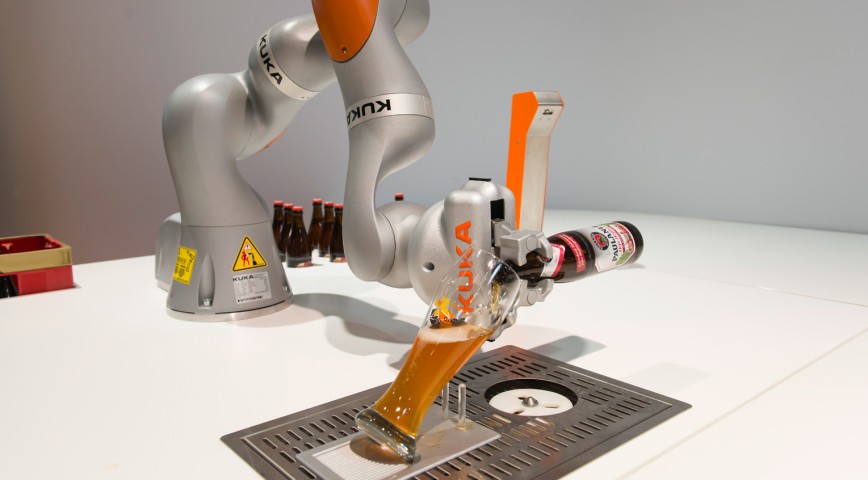 Midea, the Chinese company which acquired industrial robotics and automation systems supplier Kuka, is planning to launch robot bartenders and design factories where no humans are needed.

Neither one of the ideas is new, since most visitors to robotics industry events may have seen at least one robotic arm pouring and serving up a drink, and fully automated factories have been much discussed for some time.

However, Midea is thought to be the world’s largest appliance maker, producing a wide range of washing machines, fridge-freezers and other gadgets for the home.

Therefore, if it says these are the things it’s planning, the likelihood is that is that not only can the company do it by itself, such developments are likely to accelerate similar developments by other companies.

These ideas will go from being interesting spectacles at industry shows and futuristic ideas on paper to real-world realities.

The report in Bloomberg which says these are the things the company is working towards quotes Midea vice president Hu Ziqiang in an interview.

“We want to be the world leader,” Hu tells Bloomberg. “It will take time, but I think we can do it.”

Midea currently has very little robotics and automation products in among its offering, unless you class washing machines and similar household appliances as robots, as some people do.

But the company is likely to expand the “robotic” aspect of all its products and produce new types of robots for the home, using Kuka’s technology.

Kuka currently operates independently within the Midea group, but could use its parent company’s vast logistics network and connections to increase its reach into new markets.

Specifically, Kuka has so far only operated in the industrial space, whereas Midea is a supplier of consumer products. If Kuka were to produce service robots – or assistive robots – for the home, Midea would have a ready-made sales and marketing structure within through they could be distributed.

Meanwhile, Midea’s workforce has halved to 100,000 since 2011, while revenues have gone up, according to Bloomberg.

Moreover, the joint company is likely to take advantage of the Chinese government’s strong support of robotics and automation technology, with its stated target of producing 100,000 robots a year by 2020, compared with the 33,000 it is said to have produced in 2015.

“There’s huge potential for us to expand,” says Hu.