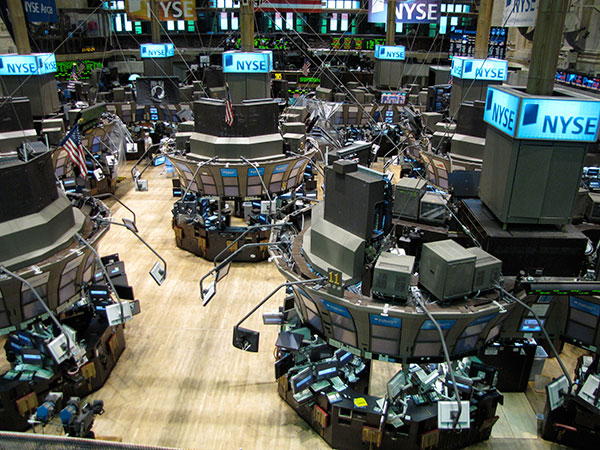 The news that investments in robotics and automation companies have out-performed all other investments on the stock market will only add to the allure of this sector.

Fuelled by a renewed fascination and technological advancement in artificial intelligence, investors are enthusiastically looking for funds and companies in which to put their money.

There’s very few investments in life or in history that can offer get-rich-quick returns, but certainly a wise investor could make substantial returns if they are careful with their money.

According to a report on CNBC, investments in robotics and artificial intelligence companies and funds have returned significantly more than the Dow Jones Industrial.

The website noted that one fund, the ROBO Global Robotics and Automation Index, is up 25 per cent, which is clearly more than double the 9 per cent increase the Dow Jones has seen.

And one of the investment experts planning to profit from this sector says a new fund being developed will be even more closely targeted on robotics and automation companies.

In an exclusive interview with Robotics and Automation News, Gerald Brace, managing director of AlphaCentric Asset Management and part of the Multi-Funds group, says the new fund will be different from ROBO.

ROBO is what’s called an exchange traded fund, or ETF, which is just a technical term for a marketable security that tracks a basket of assets.

By marketable, we mean it can be bought or sold, just like you buy and sell shares in an individual company. And by assets, we mean companies.

The new fund, says Brace, will be restricted to only robotics and automation companies. “Right now in the marketplace there is only the ETF, which is ROBO. We are the first actively managed portfolio.

“I believe the big difference between us and other ETFs is the restriction that our portfolio manager has in making sure that the majority of the companies’ revenues that are in the portfolio actually come from robotics and automation, whereas I think the ROBO ETF has a much looser definition.

“Our new fund is a much more ‘pure play’, and that is the big difference. And we’re just starting to get onto the major investment platforms and I’m very excited, not only about being first to market, so to speak, but also the opportunities that are available in that space.

“In my mind, it’s almost like a new industrial revolution.”

Depends on your definition

Many people have been speaking about something called Industry 4.0, suggesting that we are going through the fourth industrial revolution.

The thinking is that the first industrial revolution was powered by steam, the second was accelerated by electricity, the third discovered computing.

And the fourth, which is happening now, according to some, is about connectivity – all factories and machines, from large to small, in all corners of the world, can now be connected and managed centrally and entirely automated.

That’s the idea anyway, but no one has actually done it yet. The vision of a factory entirely run by robots and intelligent machines is one that a lot of large companies are working towards, and connectivity is what holds the promise that the vision can be realised.

It’s something that is motivating a lot of technologists and scientists to contribute their knowledge and expertise to achieve, not least because the monetary rewards of such high levels of efficiency are simply enormous, historic even.

From Brace’s point of view, the opportunities are “compelling”.

He says: “There’s probably two things that are very compelling about this particular field from an investment standpoint.

“One is the fact that even though robotics and automation seems like a niche or a sector, or a slice of the overall market, this trend or this theme is happening across every single business on the planet.

“Either they are already automated, they are in the process of automating and using technologies such as robotics, or they’re having meetings about how they can use robotics and automation to streamline their business.

“By investing in this area, you’re investing in almost every kind of business that’s out there. The robotics and automation companies have a very broadly diversified client base.

“They’re not just selling into one particular niche or group, so they’re in a situation where if one particular sector doesn’t want this type of product any more their companies are going to be damaged or go out of business.

“There are so many different applications to these technologies across every business sector, which makes it a truly diversified investment.

“The other compelling thing is that this space is projected to grow at a substantially higher rate than both global GDP growth and corporate profit growth.

“It’s their top line, or their revenue, they’re having difficulty growing, so the only thing they can do in lieu of that is to streamline their profitability utilising robotics and automation.

“That seems to me to be a very compelling way to achieve greater profitability.”

If asked, everyone might be able to say what their own favourite robotic advancement is. For Brace, it’s in the area of healthcare, specifically, robot-assisted surgery, the most well-known example of which is, perhaps, the da Vinci machine, made by Intuitive Surgical.

Brace says: “The thing that most fascinates me in this space is the da Vinci machine, the robotic surgical system.

“It’s unbelievable. I think Intuitive Surgical is the company that manufactures the da Vinci machine, and from what I understand, the da Vinci machine is getting FDA [US Food and Drug Administration] approvals almost every single week to add on another type of surgery that this robot can perform, and they’re finding – at least initially – zero error rate.

“But every week I believe, from what I gather, they get a new FDA approval for a new surgical procedure that they are allowed to perform using this machine.

“And given that the state of healthcare we have, and I think the level of healthcare that maybe everyone on this planet wants to see while saving money where they can, especially as healthcare seems such an expensive proposition, particularly considering that the profit motive isn’t necessarily as high a priority in that sector, this could be an incredible area – not only to improve healthcare but also to reduce costs.

“So I’m fascinated that this da Vinci machine can do intricate – really intricate – work inside the human body. It’s really mind blowing to watch.”

But he adds that there are so many other sectors where robotics and automation technologies are also making a big difference to how people work and how companies become efficient and more profitable.

Perhaps it’s an irony that a fund that invests in robotics and automation companies is itself run by humans rather than algorithms.

Algorithmic trading is a phrase that has come to prominence of late, and simply refers to software which can make investment decisions – beyond just buying and selling within set price parameters.

But given that the growth of robotics and automation technologies could take unpredictable directions, perhaps it’s better that a human tries to make sense of the emerging trends.

“I don’t use algorithmic trading systems,” says Brace. “I don’t represent any investments that are algorithmic.”

“Some say that it makes the market deeper and more liquid. I think that when there’s things like that that happen, it can trigger major market dislocations and they’re subject to technological hacking and that could have major negative effects the market.

“That being said, I think from an execution standpoint, you’re seeing more and more extremely large asset managers move away from people actually making investment decisions and moving towards these quantitative, algorithmic strategies because it’s cheaper.

“And obviously they don’t see excess return being delivered by human beings. If human beings were able to outperform computers in investing then I think they’d stick with them, but I think the ability to generate alpha consistently is extremely hard and it doesn’t usually happen year after year after year.

“So it means that the amount of money saved by using algorithmic systems instead of humans is well worth giving up whatever number of basis points and excess return over, say, a five-year period.

“Some would say argue the combination of algorithmic trading – whether it’s in individual securities or if it’s in ETFs – is making the market less stable. That’s the argument some would make.”