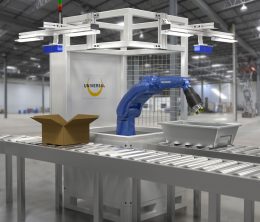 Universal Logic says the Neocortex G2R Cells met their requirements of reliably handling tens of thousands of different consumer goods faster than semi-skilled labor, and says that each Cell has a 12-month payback.

The Cells are compact and pre-engineered to replace supply chain labor in a one-for-one swap and install in one day, says the company.

They pick items from bins, totes, conveyors or pallets, and place them into shipping boxes, bags, or machine fixtures. The G2R can read barcodes, identify labels, or take measurements.

It is used in both finished goods and manufacturing supply chains. Its effective cost is $7 an hour for a two-shift operation.

Universal Logic’s software as a service includes a five-year remote diagnostic service and software upgrades, and hardware is warrantied for one year, with optional equipment and custom integration available.