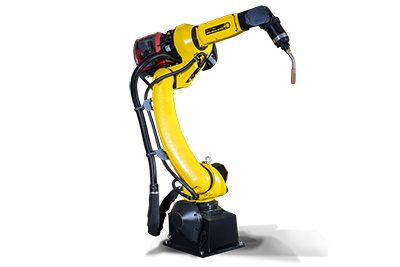 As of September 2017, the Arc Mate 100iD can be ordered and will be publicly displayed at these two trade shows in Germany: EMO in Hannover and Schweissen & Schneiden in Düsseldorf.

“Additionally, it can be operated intuitively from its new graphical user interface.”

Fanuc claims the Arc Mate 100iD reaches the highest axis speed and precision in its class.

Especially for narrow work spaces, or when being mounted upside down, this arc welder gives a full working envelope, reach and stroke for higher production throughput, says the company.

It has a fully integrated welding hosepack and cable management where the cables are lead through the robot’s hollow arm, wrist and body.

It allows the sensor cables and air pipes to be routed along together the welding hosepack, eliminating external cables interfering against peripheral equipment.

Through the improved wire feeder mounting, and the slim robot profile and footprint, the Arc Mate 100iD is the ideal choice for designing compact welding cells. The payload remains at 12 kg as the best reference in its class.

Like all Fanuc robots, the Arc Mate 100iD supports many intelligent functions including built-in vision systems such as the Fanuc-developed iRVision system.

Additionally, Fanuc says its possible to connect a broad range of arc welding software options as well as dedicated safety functions, such as the DCS.