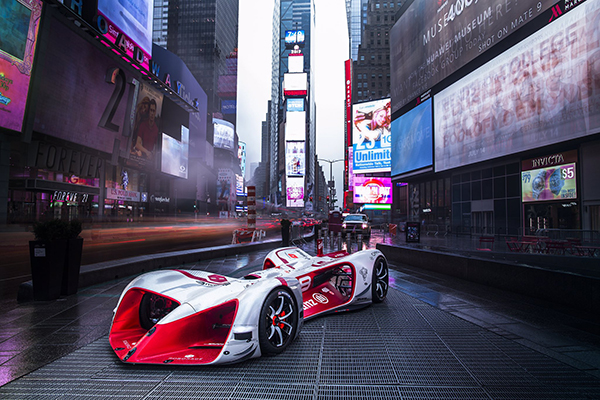 Roborace has been showing off its driverless electric racing car in New York, in the US, after organising similar exhibitions in other countries.

The car incorporates technologies such as lidar, radar, cameras, ultrasonic sensors, optical speed sensors, GNSS positioning, and others, according to Engineering.com.

Roborace claims it became the first company in history to race two driverless cars – its development vehicles DevBot 1 and 2 – simultaneously in from of a live audience on the streets on Buenos Aires, Argentina, earlier this year.

At the time, Roborace CEO Denis Sverdlov said: “This is an historic moment for Roborace and for the future of autonomous vehicle development.

“Seeing these two cars interacting at speed on a race track shows how fast the technology is progressing and how important a platform Roborace is for further development.

“It is so exciting to see these vehicles functioning without any human intervention, making their own decisions and taking appropriate actions in order to guide themselves around the track.

“The basis of competition is interaction. The ability of the AI software to perceive and interact within a dynamic environment is critical to Roborace.

“Today we demonstrated a major milestone in this direction with full awareness between two vehicles combining world sensing, compute and communication technologies.”

Roborace has since held similar events in Barcelona, Spain, and Paris, France.

Daniel Simon, Roborace chief designer says: “Roborace opens a new dimension where motorsport as we know it meets the unstoppable rise of artificial intelligence. Whilst pushing the boundaries of engineering, we styled every single part of the Robocar.

“We take special pride in revealing a functional machine that stays true to the initial concept shared, a rarity in automotive design and a testament of our determination. It’s a great feeling to set this free.”