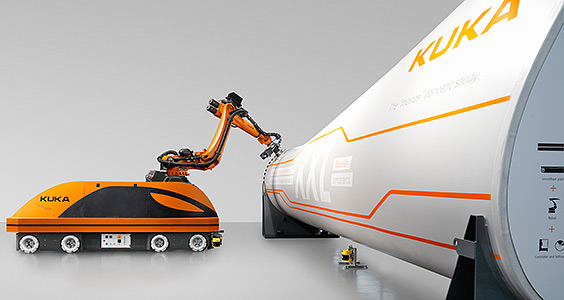 Captives #B04 from Quayola on Vimeo.

Industrial robots which are normally seen in factories making cars or some other heavy industrial object are increasingly shown as drawing or painting like artists.

These days, with ever-more powerful artificial intelligence software driving the robots, it’s difficult to say if there’s anything left that robots cannot do.

The big question is probably, “Is there anything that humans can do that robots cannot?”

Kuka is probably the company that has most often explored the question, occasionally showing a robot creating a work of art, or sometimes writing words with a pen.

People may have previously thought that it’s tasks in the creative field – such as drawing, painting and sculpting – that robots will never be able to do.

But it really depends on how they’re programmed: if they’re set up to sculpt, then that’s what they’ll do; if they’re coded and configured to paint, they can do that too.

And unsurprisingly, they’re quite good at these things. So good that many works of art are being exhibited at galleries, and competitions are being organised to find the best robot artist, one notable contest being run by RobotArt.com.

Ultimately, however, a robots or the AI an artist uses is essentially tool, like a paint brush or sculpting rasp or riffler.