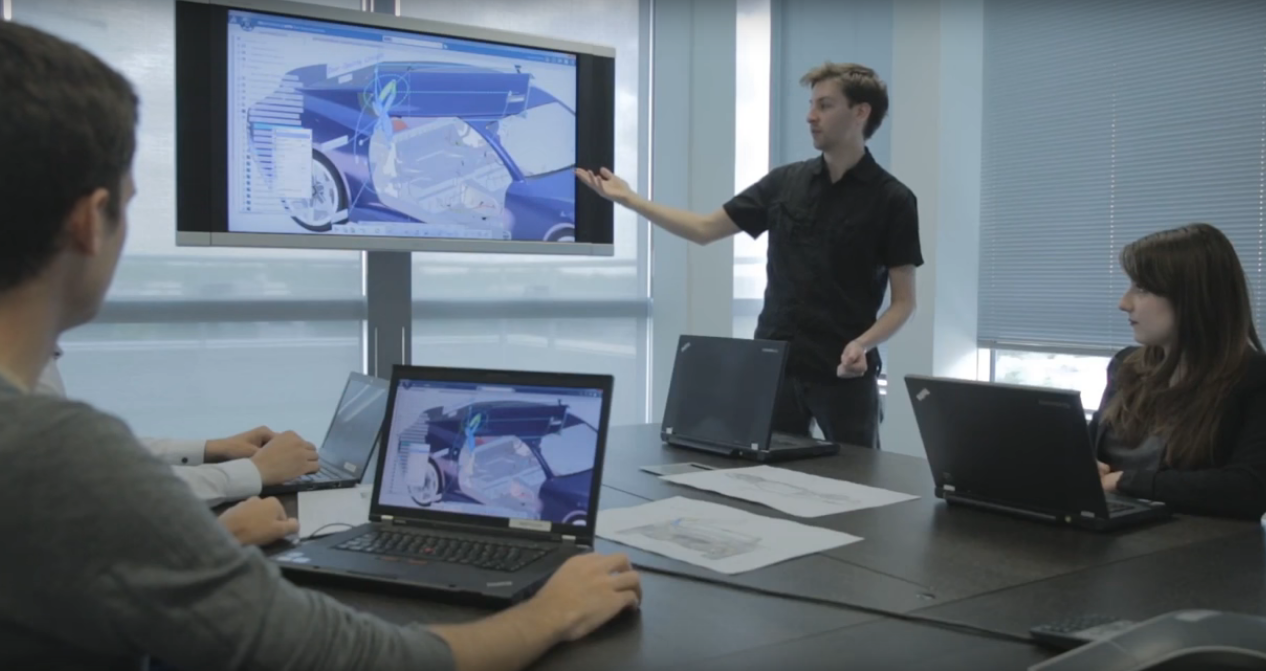 Nothing is as straightforward as it might first sound. So, for example, one might imagine that, by using generative design software, a designer could set parameters for the computer to produce a structure and then use a 3D printer to output that structure, whether that structure is a single molecule of steel or a larger, more complex structure, like a car body. Basically, you could get the computer to do almost all of the design work.

The technology is available to do those things. And any designer who’s produced countless iterations of one basic design would certainly appreciate such powerful software. But is it really as simple as that? Probably not.

If anyone would know the answer for sure, it would be Stephen Chadwick, managing director of Dassault Systèmes for the north European region, or EuroNorth, and he says it’s possible to remove humans from the design process completely.

Dassault Systèmes is one of the largest software companies in the world, the second-largest in Europe by revenue, after German software giant SAP.

Dassault Systèmes itself is French. Its main products are its 3D computer-aided design software, or CAD, and its product lifecycle management systems, or PLM. And perhaps its most well-known application is Catia.

At a press conference in London this week, Chadwick spoke extensively about a wide variety of subjects relating to Dassault Systèmes, including the idea of automating the design to the extent that you could leave out the human element almost entirely.

One of the ways to do this is by using something called “generative design”.

Dassault Systèmes is strong many different markets, one of which is life sciences. The software’s hallmark super-accurate simulation of physics enables scientific experiments to conducted and analysed with as near-to perfect accuracy as is possible with computers.

This realism, if it can be called that, is probably at root the main reason for Dassault Systèmes’ success – it’s not just that the renderings of 3D worlds and objects the software creates look good, it’s also that they’re totally life-like, right down to the last molecule.

Which all means that asking the Dassault Systèmes software to create a generative design would be an exercise limited only by the laws of physics.

But what is generative design, and how does it fit into Dassault Systèmes’ process?

Chadwick starts by referencing Dassault Systèmes’ acquisition a couple of years ago of a company called Accelerys for $750 million.

“It was to answer the question, ‘How do we leverage that capability of materials at the molecular level across all our industries?’

“This led to the increase in our understanding of how we can utilise the knowledge of materials at the molecular level within our market sectors – aerospace, automotive, industrial equipment, and so on.

“The computing system can then auto-generate the optimum design from a particular material in a particular environment that can be manufactured in a 3D printer or additive manufacturing process.

“So much so that you end up with quite strange shapes that actually perform better.

“It’s essentially the addition of materials science into the design process.”

Along with CAD, Dassault Systèmes provides related applications which are more specialised for specific sectors, such as:

Some of the specific applications on the Dassault Systèmes platform are:

In total, Dassault Systèmes has 11 applications on its 3DS platform – or “3DExperience platform”, as the official name goes – but that figure is likely to change as the company explores new markets and innovations.

Dassault Systèmes has also recently released newer, more consumer-oriented software, such as HomeByMe, which is available online free and enables users to design floorplans and place virtual furniture in a virtual property.

But Dassault Systèmes’ strength, or rather dominance, is in the industrial design and engineering sector.

As Chadwick says, every plane you’ve ever flown in and every car you’ve ever travelled in, and maybe even every ship or boat you’ve ever sailed in, and almost certainly every industrial robot you’ve seen, has been designed using Dassault Systèmes software.

For those unfamiliar with Dassault Systèmes, the company was established in 1981 as a business unit of what is now the Dassault Group.

The idea was to develop and market Dassault’s own computer-aided design program Catia, which has since become the industry standard for the design and development of planes, trains, automobiles, robots, and almost any machine you can think of.

The Dassault Group now has about a dozen business units, and perhaps the most important – because of the importance of software in today’s world – is Dassault Systèmes.

“I’m responsible for northern Europe for Dassault Systèmes,” says Chadwick. “That’s the UK, Ireland, the Nordics, the Benelux, and the Baltics regions.

“So you can imagine the diversified nature of the cultural differences that exist in each of those country groups and then down at the individual country level.”

And in some countries, the different cultural mix differs from region to region, north to south and so on. All these things need to be understood, says Chadwick, to enable the business to grow.

In the six years that Chadwick has been in charge, his business unit has grown from 200 people to 1,400, partly through acquisitions.

The activities of such a large company would be too much and too varied to list in one article. But just a quick glance at its most recent announcements gives you an idea of how diverse the company is:

Perhaps the Aitac acquisition merits a closer look because the company has what sounds like a quite interesting bit of software. But then everything is interesting if you’re interested.

Boats on the cloud

Aitac is a Dutch company which specialises in marine and offshore engineering software, and has something called Smart Drawings.

Smart Drawings can automate the creation of drawings from a master 3D model of a ship, platform or other structure designed using Dassault Systèmes’ Catia application.

Dassault Systèmes says this automation is based on rules and templates that account for marine-specific standards, behaviors and local requirements.

It adds that companies can “significantly reduce” the cost of drawings production, improve the quality of certification documents, and maximize the value of the master 3D model.

Smart Drawings sounds like an extension to Catia, but it provides perhaps a crucial insight into the future of industrial design: the impact of generative design.

Generative design has been around for quite some time, about a decade or so, but perhaps now it’s more applicable because the computing power is available to make the most of it.

Simply put, generative design software enables the human designer to specify materials and set parameters for the design of, say, a chair – for example, how much weight needs to be able to bear and so on; and then the computer itself will produce a shape or design based on those parameters.

Experts say this often leads to quite interesting shapes and dimensions that perhaps a human would not have considered.

In order to process so much information – the parameters of the materials, environmental physics, and the product itself – not only does the software need to be powerful, so does the computer.

In fact, one single computer is probably not enough for complex designs, you need the cloud, which might explain Dassault Systèmes’ acquisition of Outscale.

So, with automation and generative design coming into the frame, is there room for human designers in the picture?

Chadwick claims there is. “In terms of generative design, the ability for computing power to create the perfect design you could question.

“You may hear that it’s possible to remove the human element from the design process, and the example I would give here would be – and it’s something we’ve been using extensively – is the design of brackets which are used to hold aeroplane engines in place.

“You could accurately model the stresses and strains the physical components at the molecular level of a particular manufacturing material.

“You could then choose the right manufacturing material based on your observations. And that material would then be organically designed automatically in generative design to enable to be the optimum weight, lightest possible, and strongest shape possible to function and do the job you originally wanted it to.

“You could say that that’s removed the human completely. But actually what would really happen is that the human is now involved in much more intellectual tasks and artistic elements of the design.

“So if we were to take a car or a shelf, or whatever object or product, the human is still needed to make it an object of art, or at least artistic, whereas the computer will just design it to be functional.

“The human will create it to be appealing to other humans, who are the ones who spend their money based on decisions which often relate to their artistic tastes.

“They might accept that under the bonnet, so to speak, the design meets certain requirements and standards, but the human experience – visual and other senses – is what is often the ultimate decisive factor when purchasing something.”