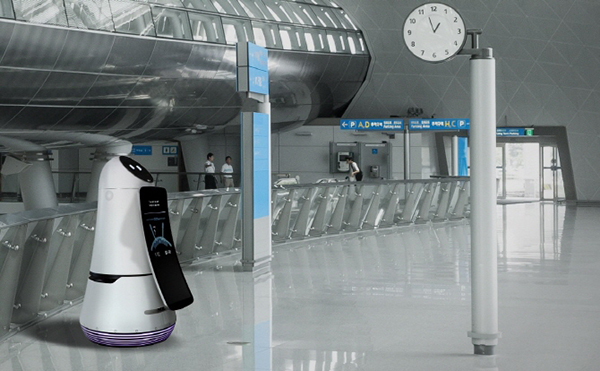 South Korea’s largest airport – Incheon International Airport, in Seoul – has given jobs to a number of robots made by LG Electronics.

The mobile machines are designed to enable travellers to scan their tickets to get flight information and they can escort them to the flight gates.

Alternatively it can just provide directions to locations within the airport, complete with walking distances and times, or information about the traveller’s eventual destination, such as weather and other details.

The “Airport Guide Robot” as it’s called can currently speak four languages – English, Chinese, Japanese and Korean – and is described by LG as an “intelligent information assistant”.

The Airport Guide Robot is just one of four new robots electronics giant LG has unveiled this year. The other three are:

LG says the Hub Robot can connect to other smart appliances in the home to complete household tasks such as turning on the air conditioner or changing a dryer cycle with simple verbal commands.

An interactive display can showcase a variety of information such as images of contents inside of the refrigerator and recipes, complete with step-by-step audio instructions.

LG says it’s one of the industry’s early innovators of robotic vacuum cleaners, and adds that it’s lineup “would not be complete without an industrial-sized robot vacuum”.

So, LG’s Airport Cleaning Robot is a super-sized robot vacuum equipped with a large-capacity dust canister as well as multiple brushes and motors.

Capable of cleaning everything from tiles to carpet floors, this robot is equipped with the latest in smart sensors and multiple cameras to ensure a safe, effective and powerful performance in even the most crowded airports.

Multiple sensors using light detection and ranging (Lidar) as well as sensitive bumpers which detect obstacles are employed throughout. The use of simultaneous localization and mapping (Slam) technology, enables the robot to be “always aware of its location”.

LG says its Lawn Mowing Robot rounds out the company’s lineup of advanced robots, and is ideal for many types of yards.

The Lawn Mowing Robot benefited from the many years it took LG to develop the Hom-Bot vacuum cleaner, and is “able to trim grass accurately, reliably and most of all, safely”.

Equipped with many of the advanced sensors and bumpers found in the airport robot, the Lawn Mowing Robot recognizes its own location at every moment, as well as the location of every obstacle in sight, such as trees or hedges.

In addition to its features, the side wire simplifies the ordinarily-complicated installation process without the need to calculate offsets, making it easily accessible and user-friendly.

While the vast majority of LG’s income is generated through sales of conventional home appliances and entertainment systems, the company is apparently looking to the growing trend for home robots to create new and significant revenue streams.

Worldwide the company employs 82,000 staff and its annual revenue for 2016 was just under $46 billion.

Speaking earlier in the year at the CES event, Song Dae-hyun, president of LG’s home appliance and air solutions business, said: “LG has been involved in smart technology and robotics for many years with the Hom-Bot robot vacuum cleaner being our most visible consumer effort.”

He added: “We’re demonstrating how we’re taking the knowledge gleaned from years of research and applying that to various situations inside and outside the home.”

The market for vacuum cleaning robots might be thought to be relatively new, but in fact dozens of companies produce the devices already – and are generated huge revenues.

And even in the airport robot market, LG will face competition from a variety of companies, some new and some very well established.