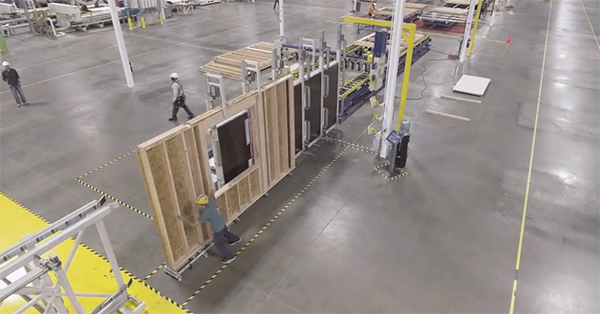 Prefabricated construction is where the individual components and parts of a building are manufactured in a factory and then transported to the building site and assembled together to form the final house or commercial building, or whatever it may be.

This construction technique or methodology has been around for quite some time and its proponents have probably often wondered why it doesn’t become the main way dwellings and office blocks are built.

Its supporters say it reduces the costs of construction significantly and enables more accuracy and quality in the final building process.

But whatever the reasons for its slow growth, for now, prefabricated construction is just a small portion of the overall construction market.

The global prefabricated construction market is set to grow from $125 billion in 2015 to $177 billion by 2021, according according to a report by Markets and Markets, which calls it “precast” construction, but they mean more or less the same thing.

Meanwhile, total construction spending is said to be a massive $1 trillion – just in the US alone. According to management consultants McKinsey, the global construction market is worth $12 trillion.

However, some observers are forecasting that, as robotics and automation technologies become more affordable and more easy to install, prefabricated construction is on the verge of accelerated growth and could fulfil some of the potential its backers say it has.

A number of startup companies are beginning to integrate much more robotics and automation into their factory processes to make parts for prefabricated buildings.

The Kat that got the cream

One of them, Katerra, actually describes itself as a “technology company” rather than a construction company.

With materials and products arriving at construction sites just-in-time and ready to install, a Katerra job site more closely mirrors a process of precision-sequenced product assembly, says the company.

Its chief executive, Michael Marks, says Katerra is introducing a new model for construction which represents a huge change for everyone in the construction industry.

Marks says: “Through our truly revolutionary integration of services, manufacturing, and powerful technology, we see an immense opportunity to help move the industry forward and make construction around the world less expensive and more sustainable, resulting in more housing, at a higher quality, faster, for less money.”

And investors seem to believe in the company. Katerra has raised a total of $221 million and is valued at more than $1 billion, according to the Wall Street Journal.

California-based Katerra has recruited former Apple, HP, Nokia, SanDisk and Google employees to its ranks, and Marks himself used to work for Flex, a US electronics manufacturer with a market capitalisation of about $8.5 billion and which employs approximately 200,000 people.

Moreover, Katerra has itself has been on the mergers and acquisitions market, last month acquiring Nystrom Olson, a boutique architectural studio specializing in socially and environmentally sustainable modernist architecture.

Katerra now has more than 550 employees and has orders worth $500 million.

The company has one 200,000 sq ft factory in Phoenix, and plans to build seven more within the next two years.

Katerra is of course by no means the only company in prefabricated and modular construction market, or even the only one which uses high levels of technology.

According to Report Linker, key companies in the sector include:

But in terms of hi-tech startups in the sector, a number of new companies are emerging, one of which is Factory OS.

The startup company’s first order was from Google for 300 housing units for the tech giant’s employees.

Factory OS claims to be able to build 40 per cent faster and for 20 less money than conventional construction techniques.

And while the prefab market in the US is sizeable, other countries also have relatively large prefabricated construction markets – namely Japan, Germany and Austria.

It’s probably no coincidence that Japan and Germany are two of the world’s leading manufacturers of industrial robotics and automation systems.