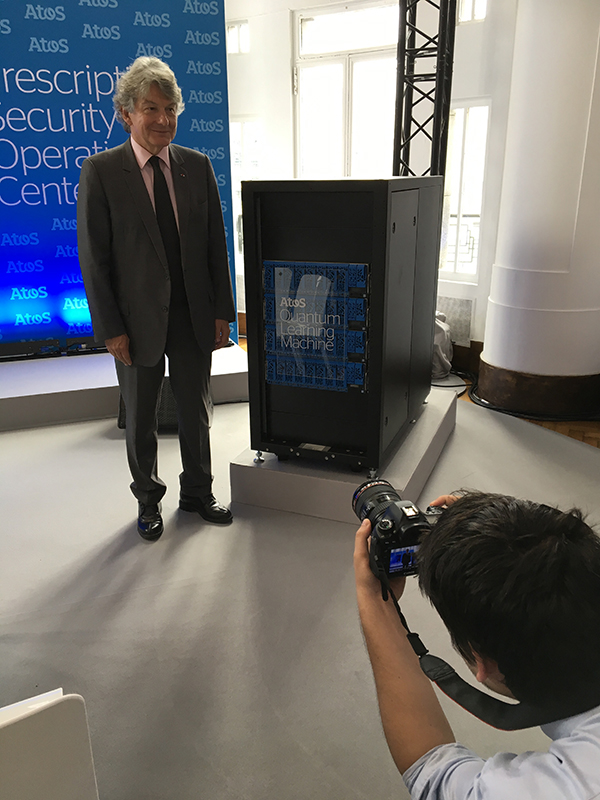 A company called Atos has built and released what it claims is the world’s first commercially available quantum computer emulator.

But it’s programmed to simulate a quantum computer. Atos has named it the Quantum Learning Machine, and has even invented a new language for programming it.

In what some people call “classical” computing, which is all the computers around today, the hardware processes binary digits, or bits, which – like light bulbs – are either in the zero state, which is off, or in the one state, which is on.

Quantum computing uses quantum digits, or qubits. The interesting thing about qubits is that they can be in several states at once – both zero and one at the same time, and many points in-between… simultaneously.

It might be difficult to fathom, but that is the nature of the universe at the quantum scale, apparently. And computer scientists are in a race to utilise these strange quantum phenomena in the building of hardware that is expected to far exceed the computing power of classical computers.

One probably very poor example, or metaphor rather, of the principle of quantum computing is the kitchen which has everything.

Imagine the kitchen – or computer – which has all the ingredients it needs for whatever dish all at the same time. You ask for whatever it is you want for dinner, and it just serves it to you.

A classical computer would have to do the shopping first and then do all the other steps in a methodical, sequential manner to make you whatever it is you want instead of coffee and cigarettes because you’re too starving hungry now.

Maybe quantum computing will lead to the magic microwave oven featured on Star Trek, or even teleportation.

Have a break, have a chit-chat

Pierre Barnabé, chief operating officer, big data and security at Atos, says the principles of quantum computing have been known for a long time.

“That, of course, offers tremendous accelerations in the way computing is done.

“We are entering the limits of the Moore’s Law, which holds that computing capacity doubles every 18 months or so. We are reaching the physical limits of the atoms, because we are currently at 7 nanometres for the designs of chipsets, and below 2 to 3 nanometres, the circuits are so close that the atoms can jump from one circuit or sector to another on the processor.

“So it’s impossible, physically, to continue in 10 or 15 years with classical circuit designs.

Barnabé says 40 qubits has already become a reference for the industry. The machine Atos has built starts at 30 qubits, but can reach 40 qubits or even higher.

“Where our machine is extremely innovative is that we have managed to bring this power of computing within a one-cubic-meter machine.

“It’s the first time in the world you have a machine that size, with that power, reaching 40 qubits of computing simulation.”

Atos is one of the largest information technology services companies in the world, employing around 100,000 people, and has a market capitalisation of almost $15 billion.

Barnabé says the company’s research and development labs all around the world are working to develop applications for the Atos Quantum Learning Machine, as well as develop new programming languages for what is essentially a new computing paradigm.

The plan, says Barnabé, is to be ready when the real, genuine quantum hardware is ready. “We don’t know when that will be.”

He adds that there has been a growing demand from large companies and the industrial sector for computers that can perform millions of “very complex calculations” in realtime.

Micro-managing the universe at the sub-atomic scale

Atos CEO Thierry Breton says the QLM gives the company an opportunity to gain a crucial advantage in the whole area of quantum computing, the opportunity to invent new computer languages and entirely different ways of programming.

Breton claims the Atos QLM is the “highest-performing quantum simulator in the world”, and reaffirms the company’s ambition to be the industry leader in Europe in the “next major technological evolution”.

He says: “Quantum physics will lead to profound changes notably in cybersecurity, one of the key strategic priorities of businesses today, and we are planning for the impact of these.

“The teams at our Atos Quantum laboratory have made remarkable progress, recognized by an internationally renowned Scientific Council, to provide, today, scientists and engineers from around the world with a simulation environment which enables them to develop quantum algorithms to prepare for the major developments in our industry.”

In a presentation in Brussels, Belgium, at which RoboticsAndAutomationNews.com was present, Breton unveiled what he described as a “turnkey” solution, the industry’s first commercial quantum simulator.

Perhaps even more ambitiously, the company has created a language of its own called aQasm – short for Atos Quantum Assembly Language.

It’s described as a “universal language”, meaning it can enable connectors which carry programs from other quantum simulators, which are yet to be developed.

Moreover, the aQasm language is configurable, says Atos, which has committed to adopting it as the common language for all future developments by the company in the area of quantum computing.