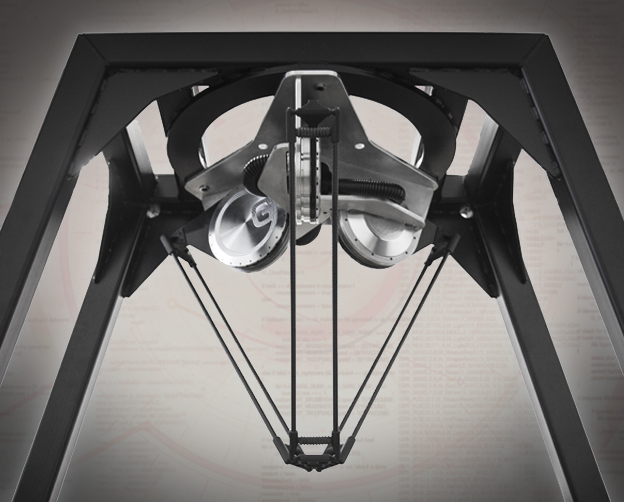 The company says it made “three foundational discoveries” which have enabled it to create the LiveDrive. But basically, it probably uses electromagnetism rather than mechanical movement.

Naturally the company is somewhat secretive about the technology and has obtained numerous patents to protect its achievement.

Genesis president Michael Gibney and CTO James Klassen explained their discoveries and the massive business opportunity they could create in an exclusive interview with RoboticsAndAutomationNews.com, conducted at Hannover Messe in April.

A couple of months on, Genesis has launched a number of new products based on its innovative technology.

Gibney says one of his main interests in financing Genesis Robotics and its LiveDrive technology to the tune of $28 million was the development of exoskeletons to help elderly people move around more easily.

And although the LiveDrive has applications in any robotics product – from industrial robots to cars – Gibney says the company will continue to develop and refine its exoskeleton application for the LiveDrive, and the research and development team “continues to find new ways for robots to help workers, soldiers, people with disabilities, and the elderly”.

A robotic exoskeleton is an apparatus that a person wears to help them complete a task. Exoskeletons can protect people from injuries and help them lift heavier weight than what is naturally possible.

Current exoskeletons can be powerful, but are also bulky, heavy and clumsy, says Genesis. These drawbacks drastically limit their usefulness and have largely prevented humans from using them in everyday life.

Genesis says the LiveDrive actuator generates high torque and speed without using a gearbox. Its “simple and compact design” also allows it to be directly mounted to the joints, giving the next generation of exoskeletons the ability to move with greater flexibility and life-like motion.

As well as exoskeletons, Genesis says its LiveDrive has the potential to bring forward a generation of personal assistance robots for the home which would have much smoother operation than those currently being developed by other companies.

The company adds that it’s currently developing assistive machines which will be able to combine the strength and power of robots with the ingenuity and dexterity of humans.

“Operators will be able to control robots directly and with precision, while easily adapting to new situations, without complex planning and programming,” it says.

While work on the exoskeleton goes on, Genesis has built a new Delta robot reference design, which uses the revolutionary LiveDrive technology to achieve “incredible performance”.

Delta robots are high-speed, lightweight robots that are most often used in “pick-and-place” operations. They are especially common in food packaging, and other industries involving light loads and high output.

Speed, precision, and reliability are some of the most important features for Delta robots. By implementing the LiveDrive technology into Genesis Robotics’ Delta reference robot, the company is expecting to make “dramatic improvements” in each of these areas compared to what is currently on the market.

The standard speed for a delta robot is about 200 picks-per-minute (ppm), and the fastest robots can reach speeds of 220-230 ppm.

Because the LiveDrive avoids the drawbacks of a gearbox, Genesis’ new delta reference robot – which it calls a Deltabot – is modelled to reach speeds of more than 300 ppm in its basic configuration.

The LiveDrive achieves these breakthrough speeds without sacrificing precision. Gearboxes deal with backlash between gears when they stop or change directions, which makes precise positioning very difficult.

The LiveDrive uses only one moving part, and as a result experiences about 1/300th of the backlash of a geared actuator. The result is a Delta robot with “extraordinary precision”, says Genesis.

The complicated moving parts and backlash of a geared actuator also cause major wear and tear, especially when those units must perform and change directions at high speeds.

The LiveDrive has only one moving part, which means it suffers much less wear over time, and can run at extremely high speeds without incurring damage, which results in a more reliable robot that’s easier to maintain, says Genesis, which adds: “The introduction of the ground-breaking Delta robot is another milestone in the development of the LiveDrive technology.”

The robot is modelled to a “lightning fast rate of 300 picks per minute”, says Genesis.

This speed potentially marks a 50 per cent improvement over the fastest SCARA currently on the market, which is capable of performing approximately 200 picks per minute.

Even more impressively, says Genesis, the robot is simulated to accomplish this feat while operating at roughly half of its peak torque capabilities.

Genesis believes that their SCARA will be able to reach even higher sustained and peak speeds.

“A SCARA robot powered by the LiveDrive, would have a tremendous impact on industries as diverse as automotive, medical, and food and beverage,” says the company.

The unique design of the LiveDrive actuator, which doesn’t use gears, belts, or pulleys, allows this SCARA configuration to set new speed benchmarks, and will allow future SCARA configurations to reach new levels of performance, adds Genesis.