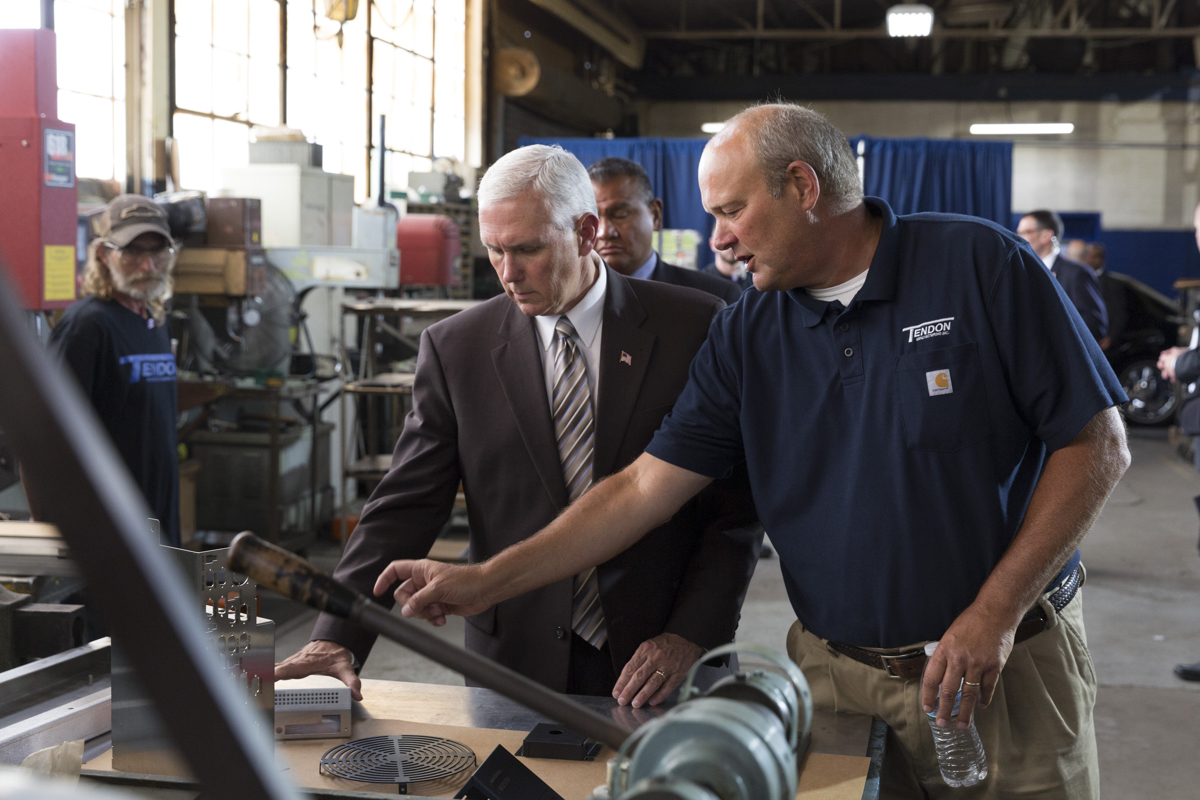 However, the vast majority of manufacturing companies in the US are small businesses, of less than 100 people.

To highlight what might be considered a typical manufacturing company, Vice President Mike Pence visited a factory in Cleveland, Ohio for a photo-op and for an excuse to highlight some statistics he says indicates “American manufacturing is back”.

The factory belongs to Tendon Manufacturing, which started almost 30 years ago with six employees, and now employs more than 75 in what Pence says are “good-paying manufacturing jobs”.

Pence adds: “Companies like Tendon Manufacturing in Cleveland, Ohio … are truly the engine of the American economy and the beating heart of our national life.

“This business is what America is all about.”

“Going back decades, manufacturers have invested in jobs and factories in other countries – but this year, company after company is making record investments worth billions of dollars in this country.

“And today, American manufacturers are more optimistic than at any point in the past 20 years.

“Confidence is back, and manufacturing is back, because since Day One of this Administration, President Trump has been fighting tirelessly for manufacturers and the men and women who work on factory floors.”

Pence added that Trump has “signed more laws to slash through red tape than any President in American history” to save American business up to $18 billion a year.

He also claimed the decision to leave the Paris Climate Accord will be beneficial to the US, mainly in the area of energy production, particularly as Trump has now approved key pipeline projects and is promoting coal. The development of both these fuel sources were held up by the Clean Power Plan of previous administrations.

Oil, gas and coal are said to be more polluting than so-called “alternative” energy sources – solar, wind, hydro and so on. But these alternative sources do not produce energy in quantities as large as can be generated through oil, gas and coal. So, despite oil and gas being dirty and polluting, the commercial advantage is huge.

Trump says that, under his plan, the US will become an energy exporter for the first time. But with so many other countries turning to alternative energy sources and developing the associated technologies in their countries, there is the possibility that not only will the US be adding to the pollution in the global environment, it will get left behind in terms of the development of clean energy technology and infrastructure.

But Pence is emphatic that the Trump administration’s priority is the economy and getting business sectors like manufacturing back up and running again.

He says: “President Trump promised to get the American economy moving again – and he’s done exactly that. As I’ve traveled the country on behalf of our President, coming to businesses just like Tendon Manufacturing in Ohio, I see each and every day that President Trump has turned our country around – and America is back.”