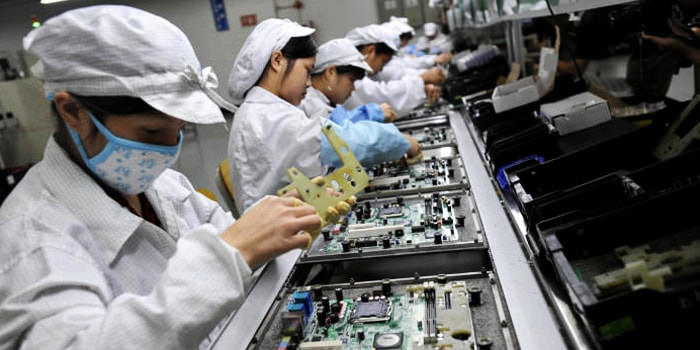 Foxconn, the main manufacturer for Apple’s smartphones and tablet computers, is looking for locations in the US to invest $10 billion into setting up factories, according to a variety of reports in the media.

The company has already earmarked $7 billion for a display panel factory after buying the Sharp electronics company, although it’s not certain where it will be located.

The Taiwanese company’s newly found interest in the US comes after President Donald Trump made it clear that he prioritises the reinvigoration of the country’s manufacturing base.

Even before he officially took office, Trump spoke with Apple and other large manufacturing companies, including automakers, to ask them to move at least some of their operations to the US, or at least set up new facilities there.

State lawmakers have taken their cue from Trump and have been trying to persuade companies like Foxconn to set up its factories in their locales.

Foxconn has annual revenues of almost $140 billion. It employs approximately 1.3 million worldwide, with around 1 million people working in China, where it makes Apple’s iPhones and iPads, among other things.

Now, it’s actively looking to other nations, and recently set up an iPhone-making factory in India.

US states which are looking to attract Foxconn include Wisconsin, Ohio, Michigan, Pennsylvania and North Carolina, but there are others as well.

Speaking at a press conference attended, Foxconn CEO Terry Gou was quoted by Reuters as saying the company will make a final decision in July.

Gou said: “In the US, the state governors’ sincerity and confidence to attract investment … is beyond my imagination.”

He added: “This time we go to America, it’s not just to build a factory, but to move our entire supply chain there.”

At a shareholders meeting, Gou elaborated on Foxconn’s plans, as quoted by Bloomberg.

“Our investment in the US will focus on these states because they are the heart of the country’s manufacturing sector,” Gou told investors.

“We are bringing the entire industrial chain back to the traditional manufacturing region of the US. That may include display making, semiconductor packaging and cloud-related technologies.”