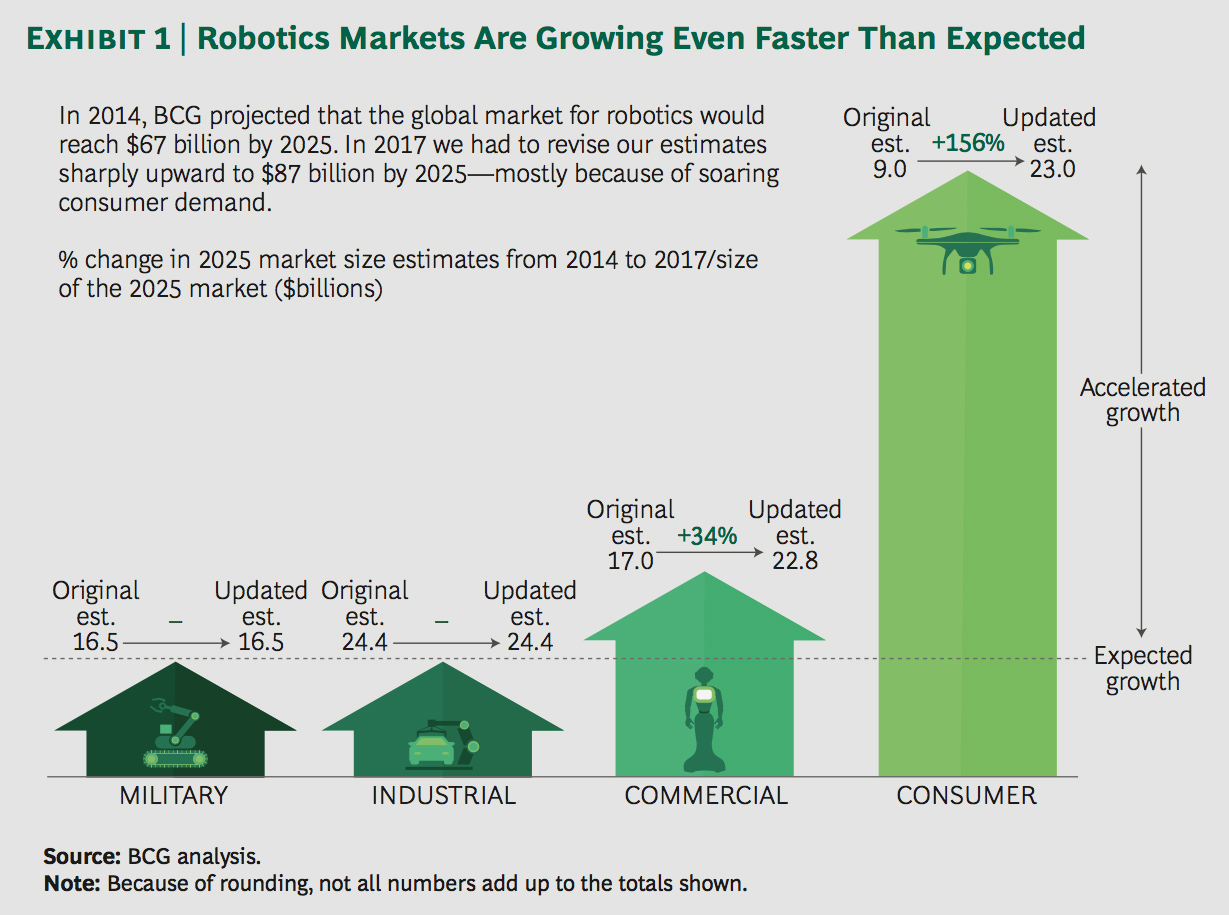 The global market for robotics is growing far faster than expected and is projected to reach $87 billion by 2025, according to new research by the Boston Consulting Group.

Updating its previous estimate of $67 billion from three years ago, the management consulting firm recently revised its forecast sharply higher, mostly because of soaring consumer demand.

In a new paper released today, Gaining Robotics Advantage, BCG projects an additional $14 billion of growth in the consumer sector to $23 billion, an increase of 156 per cent over its earlier estimate.

Vlad Lukic, a BCG partner and co-author of the paper, says: “Much of the accelerated growth will come from the consumer market because of applications such as self-driving cars and devices for the home.

“Projected growth in the commercial sector accounts for the rest of the adjustment – a 34 per cent increase to 22.8 billion.”

Many factors contributed to the need to revamp the estimates. First, in the space of just one year, from 2014 to 2015, private investment in the robotics space tripled, according to BCG.

Fueling the surge in interest are falling prices, rapidly advancing capabilities, and components usable in a far wider range of industries and applications than many observers had originally envisioned.

In 2016, the robotics field experienced a dramatic shift toward consumer-focused applications and a sharp increase in robotics companies in the consumer space.

Since 2012, 40 per cent of new robotics companies have emerged in the consumer sector, outpacing growth in the military, commercial, and industrial sectors.

The military sector has accounted for 26 per cent of new robotics companies, the commercial sector 24 per cent, and the industrial sector just 10 per cent, according to BCG’s proprietary analysis.

Alison Sander, head of BCG’s center for sensing and mining the future and a co-author of the article, says that all sectors will feel the effects once consumers begin to buy robots.

Sander says: “As people become more accepting of robots in their everyday lives – embracing everything from robot vacuum cleaners to telepresence workers in the office – they will begin to demand more such products. This will attract more investment capital and drive further advances in robotics capabilities.”

Mel Wolfgang, a BCG senior partner and article co-author, notes that adding robotics to a business is a strategic decision, not just a capital investment.

It requires rethinking and fundamentally altering staffing levels, product mix, manufacturing footprint, and other aspects of the business model.

Wolfgang says: “The challenge for forward-looking companies is to figure out how to use robotics to gain a competitive advantage.

“This may mean identifying the sweet spot where a hybrid mix of human worker and machine delivers the biggest payback, or it may involve creating an entirely new business model.

“Management needs to act now to develop a point of view, test and pilot robotic applications, and invest in infrastructure – including laying the foundation for a digital supply chain on the factory floor.”

The paper offers a framework to help companies approach robotics in a strategic, disciplined, and pragmatic way—and improve their odds of achieving a long-term, sustainable edge.