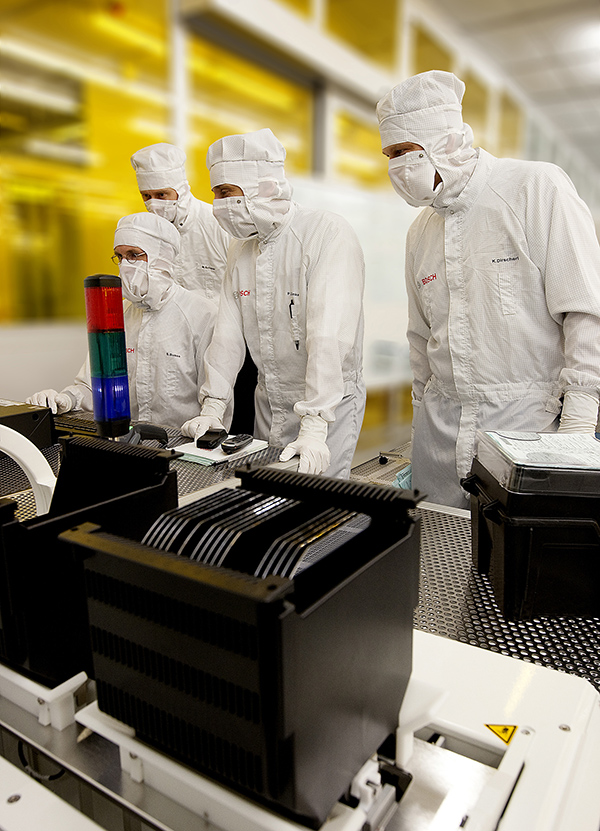 The construction of the high-tech factory is to be completed by the end of 2019, says Bosch, and production is expected to begin at the end of 2021 after a start-up phase. Overall, the investment volume for the site is estimated to be around $1.1 billion.

Bosch chairman Volkmar Denner says: “The new manufacturing facility for semiconductors is the largest single investment in the more-than-130-year history of Bosch.

“Semiconductors are the core components of all electronic systems. Their application fields are becoming ever greater due to increasing networking and automation.

“By expanding our manufacturing capacities for semiconductors, we are looking forward to the future and strengthen our competitiveness.”

According to a study by management consultancy PricewaterhouseCoopers, the global semiconductor market is growing by more than 5 percent annually. The market segments of mobility and internet of things are growing particularly fast.

Brigitte Zypries, federal minister of economics and energy, says Bosch’s investment in Dresden underlines the city’s status as “the high-tech city of Germany”.

Zypries says: “The strengthening of semiconductor competency in Germany and also in Europe is an investment in a central future technology and a very important step for the maintenance and expansion of the competitiveness of the industrial city of Germany.”

Dirk Hoheisel, the Bosch board member whose responsibilities include automotive systems and mobility solutions, says Dresden is known for its unique microelectronics cluster in Europe, called “Silicon Saxony”.

Hoheisel says: “For the expansion of our semiconductor competence the economic location of Saxony offers good conditions.”

The cluster comprises companies from the supplier, service and user industries as well as universities with appropriate technological expertise.

In addition, Dresden is to be developed into an ecosystem for the Internet of Things with the “Digital Hub Initiative” of the Federal Ministry of Economics and Energy.

Bosch says it intends to cooperate closely with local semiconductor companies and to strengthen not only Germany, but Europe as a whole internationally.

Zypries adds: “This is the next good decision for Europe’s leading microelectronics cluster here in Saxony. I would like to thank Bosch for its confidence in the location, its employees and its innovative strength in Saxony.”

Semiconductors are a key technology for modern life, especially in the growing networking, electrification and automation in industry, mobility and smart home. The basis for the production of semiconductor chips of all types is a silicon wafer.

The larger the diameter, the more chips can be produced per production run. With the 300-millimeter technology compared to established production with smaller 150- and 200-millimeter wafers, scale effects can be achieved.

Bosch says it’s important for the company to meet the demand for semiconductors, which is steadily increasing; for example, through networked mobility as well as applications in the smart home and smart city sectors.

ASICs from Bosch have been used in vehicles since 1970. They are tailored to a specific application and are, for example, essential for triggering an airbag. In 2016, every newly delivered car had on average more than nine chips from Bosch on board.

Bosch considers itself a pioneer and “the world’s leading manufacturer” of MEMS sensors. The company says it developed the technology for the semiconductor manufacturing process more than 20 years ago.

In its chip factory in Reutlingen, opened in 2010, Bosch produces around 1.5 million ASICs and 4 million MEMS sensors based on 150 and 200 millimeter technology. The company has already produced more than 8 billion MEMS sensors since 1995.

In the meantime, 75 percent of Bosch’s MEMS sensors are used in entertainment and communications electronics. MEMS sensors from Bosch are installed in three of four smartphones.

(All pictures used to illustrate this article show Bosch’s semiconductor fabrication plant in Reutlingen, Germany, which also cost around a billion dollars when it was built at the beginning of the decade.)