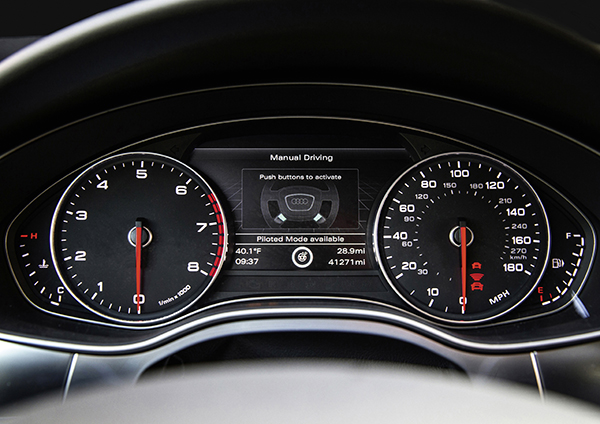 Verweyen chatted away to Sophia as though it was the most normal thing in the world. Meanwhile, Jack drove itself from Audi’s facility onto a main highway and back again.

Verweyen told Sophia about Jack, the car, and asked her questions about herself. He even asked her how it feels for her to be be driven in an autonomous car.

He said: “In fact, for many people it feels quite unusual and they need a moment to anticipate the situation. I mean, it’s a computer driving a human.”

Then he turned to Sophia and asked, “Do you understand that?”

To which Sophia replied, “It’s different for me, because I know how reliable smart systems are.”

Verweyen explained more about Audi’s autonomous car, which has also been making headlines across the US because the company has been acquiring testing permits in different states and offering free rides to local decision-makers there.

The US federal government is set to announce “within the next few months” new regulations for autonomous car testing and development. The rules will likely prevent a haphazard regulatory environment emerging as a result of individual states developing their own rules, which is what’s happening now.

He said: “Jack has a lot of sensors with him, and these sensors give him a view and an understanding of what’s going on around him.

“He has a 360-degree view around him, with radar sensors, with cameras and also with laser technology. He can look 250 metres in front of him, and 180 metres to his back.

“And by that [by using the data], he can take precise decisions about what to do next. So he’s just reacting to what other road users are doing around him.”