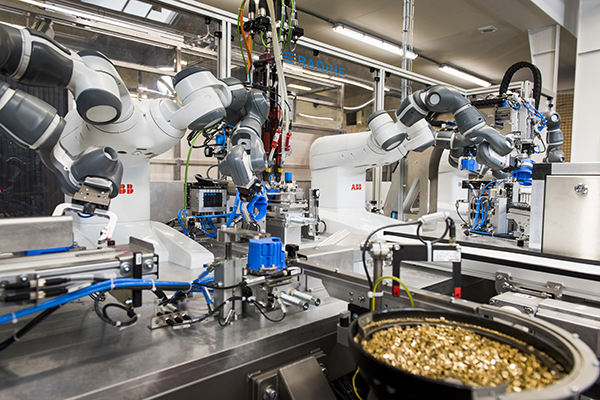 ABB has installed three YuMi robots on a new production line at its electrification products plant in Ede, the Netherlands.

Designed for use in small parts assembly, the three YuMi robots will assemble a new cavity wall socket called HW52-F.

ABB says that, due to its “inherently safe” design, the YuMi collaborative dual arm robot solution will ensure the safety of those around it and elevate the nature of work at the plant by performing repetitive tasks to perfection.

Uneto-VNI is the Netherlands’ leading association of technology installers and component part retailers.

Uneto-VNI’s president, Doekle Terpstra, says: “Digitalization and automation have a big impact on many industries. Not only in the production of equipment, but also in assembly.

“Increasingly we will see that parts of buildings are already assembled and delivered to the building site, improving productivity and quality.

“At the same time, increasing use of robots will shift the focus of our workers from dull, repetitive jobs to more rewarding, higher-skilled and higher-paying positions.

“It is a win-win situation for our local manufacturing base that will lead to continued growth.”

Many industries today have shifted from making large volumes of the same products for a long time to making smaller lots of greater variety, and for shorter product cycles.

Many manufacturers are finding that older, fixed production lines are no longer flexible enough to quickly and efficiently adapt production. Collaborative robots such as YuMi allow manufacturers to react with agility to new growth opportunities and shorter product cycles.

The installation follows the successful implementation of a collaborative automation solution with YuMi at ABB’s factory in the Czech Republic.

ABB says it has boosted the productivity and flexibility of its electrical socket assembly by allowing people and robots to work together on shared tasks.

The new HW52-F is connected, installed, and can be placed flush to the wall.

A new production and mechanization line had to be established for this product.

The socket can be made airtight and soundproof with an insert. A fire-resistant version is also available.