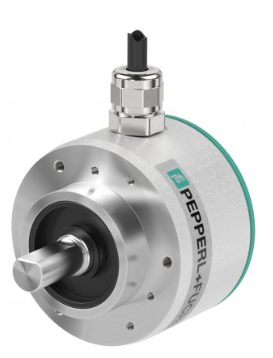 With the new ENI58IL rotary encoders, Pepperl+Fuchs says it provides “perfect standard solutions” up to the highest rotational speeds, wherever requirements for dynamics are increasing, while also providing performance features that have so far only been possible in high-performance systems.

The new ENI58IL with BlueBeam technology

The new BlueBeam technology for incremental rotary encoders with optical sensing principle is a spectacular innovation.

BlueBeam is essentially specially developed blue-light LEDs, which Pepperl+Fuchs uses for the first time in the new ENI58IL incremental rotary encoders, thereby offering performance features that have so far only been possible in high-performance special solutions.

The blue light from the new emitter LEDs exhibits a decreased diffraction compared to a longer-wave infrared light of the same gap width and can therefore depict sharper images.

Combined with modern sensing chips, which have finer and thinner structures, the penetration depth of the blue light into the chip is shorter or more energy rich.

This increases the efficiency factor of the light source so significantly that the sensing chip can generate much sharper contours. The result is a higher resolution, a significantly improved signal amplitude, and considerably reduced edge jitter.

This means, for example, that the tolerances of the phase position A to B are reduced to well below 10 %, which is more than double the signal quality compared to values that are otherwise common on the market and achievable with infrared technology.

The more reliable scan rate also results in a considerably higher resolution. In this way, the new BlueBeam technology in the ENI58IL rotary encoders guarantees absolute accuracy, even in the highest speed ranges of up to 12,000 rpm.

The maximum output frequency of the ENI58IL is a remarkable 400 kHz – up to 50 per cent higher than standard rotary encoder variants.

The highly precise BlueBeam technology offers the highest signal quality of incremental rotary encoders that are available on the market, claims Pepperl+Fuchs.

In applications, this helps to reduce the tolerances and to improve the efficiency factor, says the company.