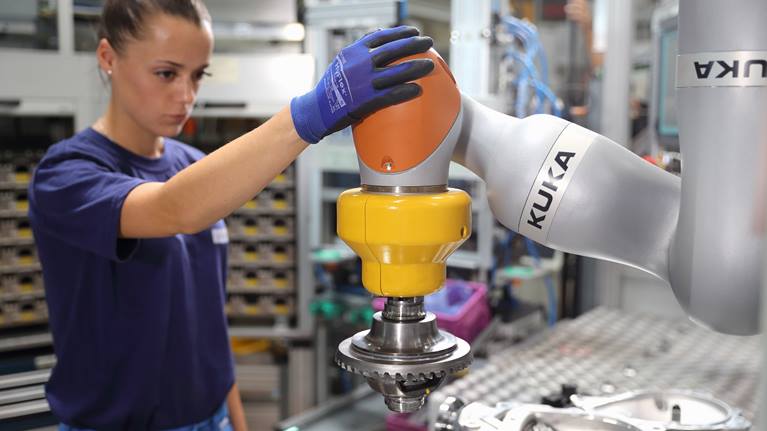 The employees at BMW Group’s Dingolfing Plant have a new, highly responsive assistant: an LBR iiwa lightweight robot from Kuka, which they say takes over “monotonous and physically demanding tasks”.

Previously, BMW employees had to lift a differential case which weighed up to 5.5 kg, and had to manoeuvre it with millimeter-precision, in the assembly of the front axle.

Now the robot is taking over this “ergonomically demanding work”.

The most challenging feature in the concept of the human-robot collaborative system was the limited space available for the construction, says Kuka.

For this human-robot collaboration project, the experts designed a system which can be integrated into the existing production line without having to redesign it.

The solution developed by Kuka systems involved a slim steel construction in the form of a gallows, to which the LBR iiwa is fixed. This saves space because the sensitive lightweight robot can work suspended, says the company.

External sensors are not required as the LBR iiwa has joint-torque sensors in each of its seven axes. In addition, the gripper has been provided with what Kuka calls an “edge-free and rounded human-robot collaboration sheath”, so that the end effector is also capable of protecting the worker against injury at any time.

Furthermore the compact control cabinet accommodates the existing production line and provides an interface to the system control. Human and robot are now joining together the differential case for the front-axle – in less than half a minute, whereas it may have taken several minutes previously.

Juergen Seifert, project manager for sensitive robotic at Kuka Systems, says: “In the future, we will see a lot more such applications in the automotive industry.

“In times of increasing variety diversity, it is a clear competitive advantage to adapt production optimally to the required capacity – using flexible MRK [motor-robot kit] units, for example.”