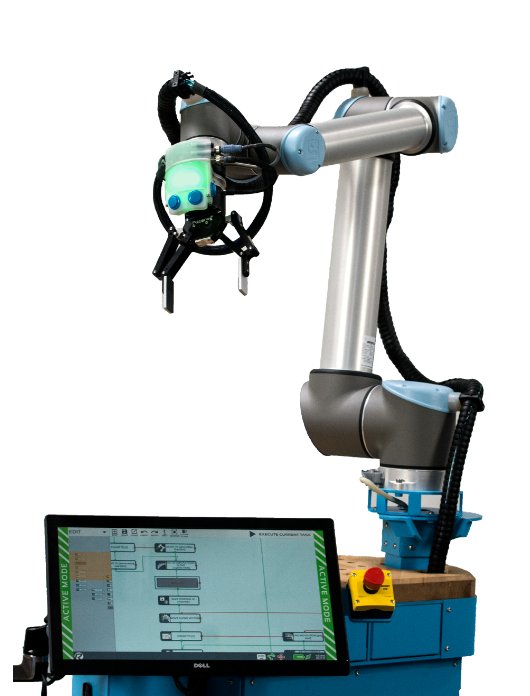 Ready Robotics has launched what it claims is the first robots-as-a-service solution, detailing its pricing, along with some IP54-rated TaskMate Hardware, at ATX East.

The company says it is a “plug-and-play robotics platform” which brings industrial automation to tasks at a fraction of the cost in less than a day.

Ready Robotics says this is “the first robots-as-a-service solution tough enough to handle real industrial tasks and flexible enough to be deployed in mere hours”.

The company says its “unique combination” of plug-and-play tooling and easy programming interface makes the formerly expensive and complicated task of automation achievable for all manufacturers.

Ready has also announced its latest partnership with ASTec Metalworks, a leading manufacturer of highest quality, complex precision-machined components for the aerospace, defense, and automotive industries.

ASTec picked the TaskMate due to the speed and low integration cost of deploying the system onto their factory floor.

Traditionally industrial robotics has required a lot of highly-customized integration work, with upfront costs typically running several times the cost of the robot arm itself. Even worse, with the process taking weeks, integration gobbled up precious time, says Ready Robotics.

The TaskMate can be deployed “in a matter of hours at a fraction of the cost” of traditional solutions, says the company, which adds that the “real advantage” of the TaskMate platform, though, is its flexibility.

The system can be retooled in just minutes with grippers from companies such as Schunk, Piab, Schmalz, and Robotiq.

It can interface with machine tools and peripherals using a multitude of interfaces, including 24-volt I/O, PLC, and TCIP/IP.

The TaskMate can store tasks for later and be deployed in minutes where the need is greatest using its mobile base and Ready’s proprietary localization system.

In addition to its flexibility, Ready Robotics is also proud to announce that the TaskMate now carries an IP54 rating, significantly increasing the number of applications in which the system can be safely and reliably deployed.

Based in the City Garage incubator in Baltimore, Ready Robotics announced $3.75 million in seed funding last year from a syndicate led by Eniac Ventures and RRE Ventures with notable contributions from Sagamore Ventures, Emerald Development Managers and others.