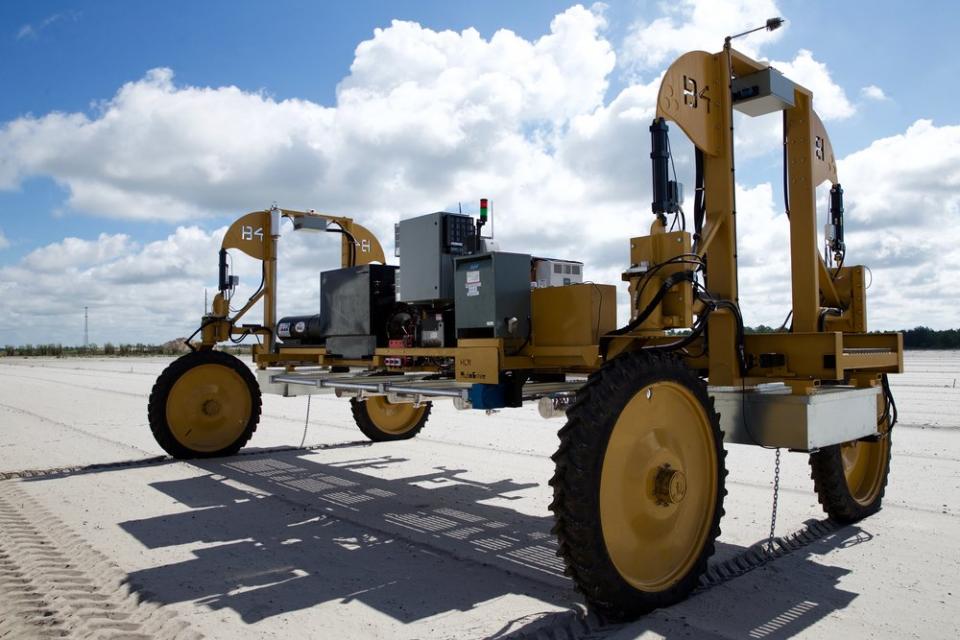 The robots will use a proprietary vision system which will identify which strawberries are ready to be picked (probably based on colour as robots can’t smell or taste yet as far as we know). Picked strawberries will then be moved to the platform level for further inspection and grading.

The field tests started last week and are expected to be completed by the end of July. Full operation is scheduled for winter 2018-19 and full commercialisation will start the following winter.

Bob Pitzer, co-founder and chief technology officer of Harvest Croo, says: “Having the machine navigate the fields autonomously is the culmination of years of work and prototyping. It is very gratifying to see our team effort come to fruition.”

Harvest Croo is expected to close an investment round at the end of July to raise approximately $1 million for its project. It is also hoping to receive $750,000 from the National Science Foundation in grant money.

Harvest Croo Gary Wishnatzki says the next stage for the company’s development is utilising the large amounts of data it will be collecting.

Wishnatzki says: “It’s kind of mind-boggling all the things we’re going to be able to do. Things we haven’t even thought of yet.”

The driving motivation behind automated farm machinery such as the one being developed by Harvest Croo is two-fold: labour costs and labour shortages – both are increasing.

Harvest Croo estimates that approximately 30 per cent of a strawberry farm’s annual budget is spent on the harvest labour costs, and the cost of labour is continuing to rise each year.

US strawberry growers are spending close to $1 billion a year on harvest labour, and this may increase in correlation with the concurrent increase in labour shortages.

And that’s if you can find the right people to do the work in the first place. Strawberries need to be picked on a strict harvest schedule, so lack of labour has become a “huge issue” for strawberry farmers, says Harvest Croo.

Harvest Croo says that more than 20 per cent of the US strawberry farming industry is investing in or partnering in its technology, which brings together experts from:

The plan is to be build a “fully autonomous strawberry picker”, which will save farmers money, improve the quality the strawberries picked, and improve harvest yields by “at least 10 per cent”, says Harvest Croo.

The system is designed to pack the strawberries as well, weighing them and getting them ready for shipment.

The Harvest Croo system is one of a number being developed for strawberry picking by a variety of companies – such as AgroBot, Octinion, and Shibuya Seiki, to name a few – in this newly emerging agricultural robotics market.

Preventing robots from eating the goods

While robots are unlikely to literally eat the fruits of their labours, there are numerous other challenges in developing such technologies for strawberry picking.

Wishnatzki says: “I charged our engineers with the task of creating a ‘picker’ that does not require a grower to radically change the way they currently grow.

“That is the major reason other robotic harvesters have not yet been commercialized.”

This is despite the fact that Wishnatzki believes the need for such systems is “imminent”.

Wishnatzki and Pitzer took to the fields to study and observe the way human pickers harvest strawberries. With that information, they began outlining and conceptualizing the first prototype, which mimics the ways humans currently pick.

Pitzer says: “With robotic manipulation, our biggest challenge is minimizing time. Based on our observations, our goal was to develop robots to pick as many berries as possible while utilizing conservation of motion.”