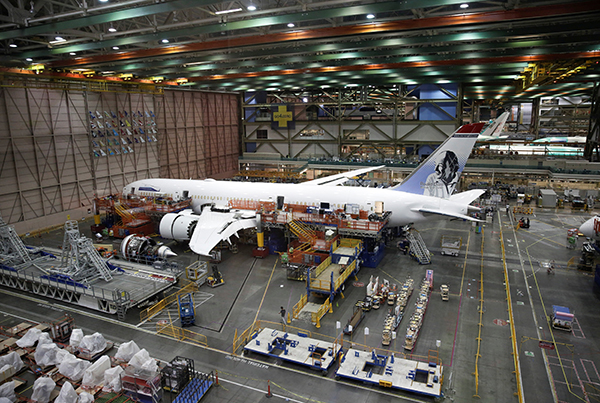 It poured $1 billion into erecting a 27-acre factory to make carbon composite wings for its forthcoming 777X widebody jet. It scaled the factory to produce 100 planes a year.

But with only 306 firm orders for the 777X on its books, and the production rate falling, Boeing is challenging workers to find more efficient ways to do the work so it can avoid purchasing some of the planned machinery.

“Frankly, we would like to not to have to buy all of the equipment that we are currently sized for,” said Eric Lindblad, vice president of the 777X programme, during a recent factory tour. “It’s just saving money on capital.”

Behind him, only two of six bays built to hold carbon fibre placement machines had been outfitted with all equipment.

Boeing also has set up a temporary low-rate assembly line for initial production (LRIP) of the 777X so it can test processes before hitting the acceleration pedal.

Reducing the risk of lemons

The LRIP strategy comes in part from painful lessons on the 787 line, where early aircraft that came out of the factory needed heavy reworking.

This time, “we are actually testing the primary elements of that new production capability” on the 777, a plane Boeing already knows how to make, said Jason Clark, vice president of 777 and 777X operations.

Final assembly of the 777X begins next year, with testing in 2019 and first delivery in 2020. Lindblad said it might be delivered a quarter early, if customers want, but not in 2019.

On the 787 line, where wings, fuselage and other major pieces are shipped from suppliers and simply assembled at Boeing, the savings options are fewer.

But teams are still taking out costs. They have slashed production time by more than two-thirds in four years through such changes as organising kits so mechanics have all parts on hand and putting interiors into planes earlier on the assembly line, said Bob Manelski, director of 787 business operations.

Boeing builds the 787 in Everett, Washington, and North Charleston, South Carolina. That allows it to try out new techniques on one line at a time. A year ago, it started noting a “champion time” for fastest production and analysing how that was done.

The savings are crucial to paying back about $27 billion in deferred 787 production costs racked up by the first few hundred 787s.

It has no choice but to continue getting lean, Manelski said. “We have to price the airplane more and more aggressively every time we got to the market.”