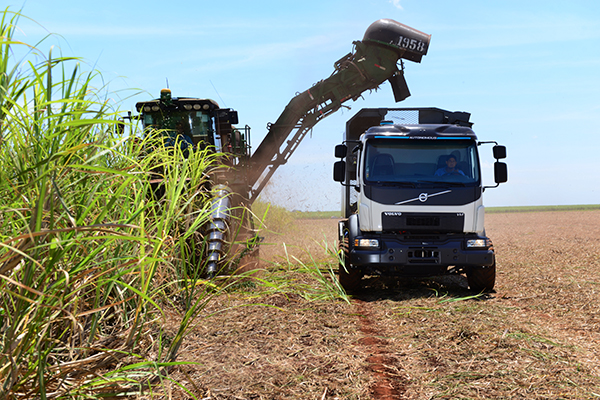 Volvo Trucks has developed a new self-steering truck that it says could become a significant productivity booster for Brazilian sugar-cane growers. (See video below.)

The truck, which is used to transport newly harvested sugar-cane, is steered with “great precision” through the fields in order to avoid damaging the young plants that will form the following year’s crop.

At present, about 4 per cent of the crop is lost as young plants are run over and the soil is compacted by moving vehicles. This can translate into tens of thousands of US dollars in lost revenue per truck per season.

In Maringá, an hour’s flight west of São Paulo, the Usina Santa Terezinha Group produces sugar and ethanol from its own sugar-cane crops.

In the past growing season, the company’s huge fields have served as a test area for a prototype vehicle from Volvo Trucks.

The truck was developed to examine how automated driving can make it possible to avoid damage to soil and crops, thus boosting revenues.

The potential for bigger harvests is significant – up to 10 tonnes per hectare per year.

Paulo Meneguetti, finance and procurement director of Santa Terezinha, the easternmost municipality in the Brazilian state of Mato Grosso, says: “With the help of Volvo Trucks’ solution we can increase productivity, not just for one single crop but for the entire lifecycle of the sugar-cane plant, which lasts five to six years.”

At present, sugar-cane is brought in from the fields using harvesters and manually controlled trucks, which drive alongside each other at a low speed.

When a truck is fully loaded and drives off to empty its load, the next one moves up next to the harvester and the procedure is repeated.

The big challenge for the truck driver is to match the speed of the harvester and at the same time concentrate fully on driving in its tracks, so as not to trample the nearby plants that will become the following year’s crop.

Volvo Trucks has solved the problem with a driver assistance system that automates steering. It ensures that the truck always maintains exactly the right course when it drives to, alongside and away from the harvester, so that the plants are not damaged by trampling.

With the help of GPS receivers, the truck follows a coordinate-based map across the sugar-cane field.

Two gyroscopes ensure that not only the front wheels but the entire vehicle is steered with great precision, to prevent the truck from veering more than 25 mm laterally from its set course.

When loading, the driver can choose to regulate speed with the help of the vehicle’s cruise control, or to accelerate and brake manually.

Since the driver is released from the burden of the concentration-demanding and tiring high precision steering process, it is easier to remain focused and work in a more relaxed and safe way throughout the shift.

Wilson Lirmann, president of Volvo Group Latin America, says: “With this solution we will soon be able to significantly increase the productivity of our customers in the sugar-cane industry.

“At the same time, we will improve their drivers’ working conditions and safety. This in turn will make the job more appealing, and make it easier to recruit and maintain drivers.”

This summer the research project will transition into the product development phase, with more vehicles being field-tested. After that, the solution can be expected to become commercially available in the foreseeable future.

Already this year Volvo Trucks Brazil will offer its VM customers in the sugar cane industry an advanced GPS-based map-reading system that gives the driver far better scope for maintaining a predetermined course, even though actual steering will still be handled manually at this stage.

The self-steering truck being used for sugar-cane transport is one of Volvo Trucks’ research and development projects for automated vehicles.

Tests are currently under way on an autonomous truck for mining operations in the Kristineberg Mine in northern Sweden, and an autonomous refuse collection truck is being tested in Gothenburg, Sweden.

The aim is to evaluate how systems with different degrees of automation can contribute to higher productivity, a better working environment, and improved safety.