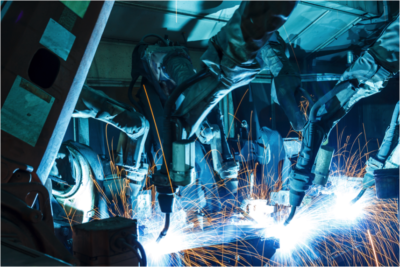 Robotic Vision Technologies will be a co-exhibitor at EastPack 2017, on June 13-15, 2017 with the world’s largest collaborative robot maker Universal Robots.

RVT will be demonstrating its new collaborative 3D vision guidance software on a Universal Robot UR5. The 3D cobot packaging solution can be seen at EastPack ATX 2017 in East Booth 2529 at the Jacob K. Javits Convention Center.

RVT, a leader in vision software for industrial applications, has been integrated into Universal Robots’ cobot arms to demonstrate precise pick-and-place items off a conveyor in 2.5D and onto a movable tray in 3D.

The ground-breaking system will be shown selecting parts from a conveyor, reorienting them, and precisely placing them in a movable tray.

The vision system can also find pieces that are stacked two or three high randomly.

This solution remedies the problematic issue of an unorganized packaging operation when trays or pallets are not precisely placed for the robot to blindly pick or pack.

The emergence of collaborative robots expands the marketplace for robotics because of lowering robot costs and increasing productivity with the ability to work safely alongside human workers.

RVT, with its collaborative VisionFactory (cVF) product, is strongly positioned to offer many vision solutions in the collaborative space for all major robot brands.

RVT made its cVF debut on a Universal Robots’ UR5 controlling an OnRobot RG2 gripper at Automate 2017 held April 3-6 in Chicago.

“We had a very successful show at Automate, bringing much interest in our new collaborative vision software.”

RVT’s cVF is available for license and will begin deliveries to users in July 2017.

“We’re enthused by the response,” Weidinger says, “and we’re looking forward to demonstrating it again with Universal Robots in New York City.”