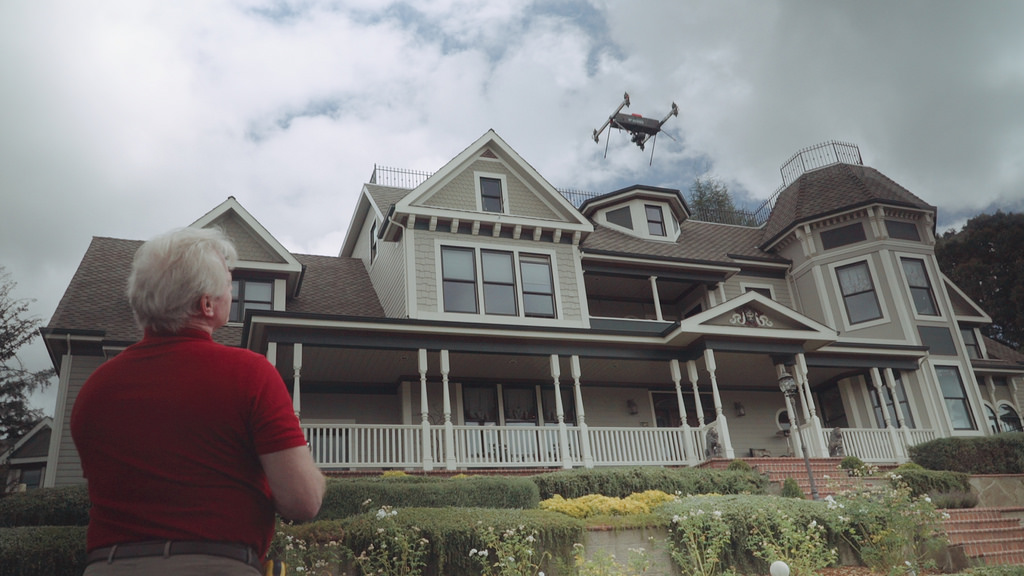 And that’s just the tip of the iceberg. The bottom line is: If you haven’t incorporated drones in your operations yet, it’s time to get the process started.

3 reasons the industry has fallen in love with drones

As I mentioned above, one of the greatest benefits of drones in real estate is that drone images mean faster sales. By combining newer features, like GPS-programmed flight paths and automatic point-of-interest targeting, drones can capture angles more dramatic than any other medium.

And because drones are so small and nimble, even expensive, full-size aircraft imagery can’t compete.

For example, drones give buyers a low-level overhead view of important property features like landscaping, back yard areas, pools and local parks and schools, capturing details inaccessible to larger aircraft.

Camera drones can capture virtual home tour footage that’s not only cheaper, but arguably better than that of traditional media.

The “better” distinction lies mainly in the camera drone’s ability to create a much more natural virtual tour, thanks to things like programmable flight paths.

More than quicker contracts
Drones speed up a lot more than the rate at which buyers buy. The technology is now saving agencies money by speeding up the entire sales process for both commercial and residential properties.

Among other applications, contractors are using drones for roof inspections, thermal roof surveys, all kinds of outdoor surveys and even some indoor inspections.

If you haven’t started using drones yet, I’ll assume you’ve realized it’s time. That said, be sure to deeply consider your two main options—hiring a pro or going for DIY. Following are a few pros and cons for both.

Pros and cons of hiring an aerial photography company

Con – the cost: Professional drone photography is pricey. For example, for a one-minute video and about 10 to 12 very high-quality still photos, you can expect to pay anywhere from $200 to $400. A detailed video will cost you around $1,000.

Con – the risk: Drone photography is relatively new, so companies are popping up all over. And it’s not uncommon to run into a company that hasn’t met the FAA’s certification requirements.

Hiring such a firm leaves you vulnerable to all kinds of liabilities if something goes wrong, like if a person is injured or the drone crashes and causes damage.

All this is to say, when you’re looking for a company, make sure its operators hold FAA Part 107 UAV certification. You’ll also want to make sure the firm carries at least $1 million in liability insurance.

Pro – quality: This is a pretty big pro because, assuming you hire a good company, your deliverables will be extremely fantastic.

Pros and cons of DIY

The right drone will cost you between $1,000 and $2,000, including the camera. And it’s essential that it has a few specific features, such as a 3-axis gimbal, automated object detection and collision avoidance.

Con – registration: This is a pretty weak con, in all honesty. Because flying an unregistered drone could land you a fine of up to $25,000, and it only costs about $5 to register your drone on the FAA website.

However, it’s just “one more thing to do” for those of us living busy lifestyles, so I figured I ought to add it to the list of cons.

Pro – creative control: Assuming you’re committed to learning how to operate your drone the right way, you’ll be able to get the shots you want, the way you want them.

Pro – Fun: If I were in real estate, this would be the clincher for me. Drones are incredibly fun to operate; there’s no doubt about it.

It’s time to get your drone on! If you haven’t already, be sure to check out the National Association of Realtors Field Guide to Drone and Real Estate.

It’s a great place to start, and it provides all the information you need to get going. Be sure to share your thoughts on drones and real estate in the comment section below.

I’m interested to know what folks in the real estate industry are doing with drones and how they feel about the future of this technology in the industry.

Tim Jennings is president of California-based company Custom Case Group, creator and manufacturer of the DroneHangar drone case. A self-described drone enthusiast, Jennings enjoys sharing insights he’s picked up working on drone-related projects with the US military and big players in other industries, including film, medicine and emergency response technology.