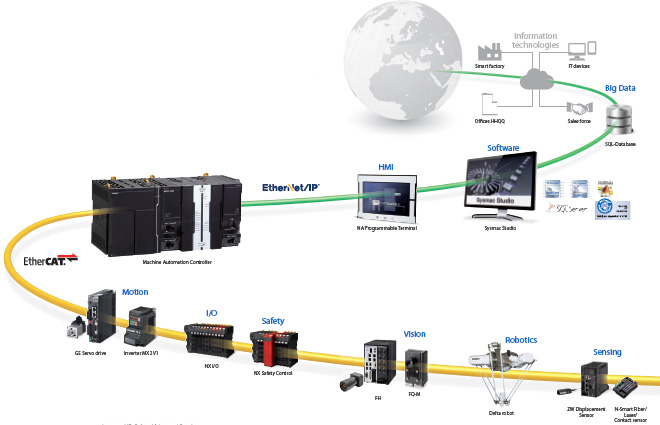 The company claims it is the first of its kind in the industry.

Using Omron’s extensive range of sensors to monitor the status of equipment and processes, the controller safely regulates them before an irregularity can occur by predicting unusual movements of machinery based on the causal model that the built-in AI has been made to learn.

As recent years have seen an ever-increasing shift toward small-lot production for a wide array of products and production at optimal locations on a global basis, the need has continually risen for introduction of AI and Internet of things on manufacturing floors in order to contain the impact of skilled worker shortages and surging labor costs while simultaneously increasing equipment utilization and achieving stable production of quality products.

To leverage data at manufacturing sites where control is performed in microseconds, high-speed and high-precision data gathering (for example, position, vibration and temperature data) and precisely associating them with time data are required.

Analyzing and utilizing these combined data allows us to quickly predict possible machine errors and prevent equipment stoppage as well as the deterioration of product quality.

Meanwhile, the rapid diffusion of IoT has brought along with it a huge quantity of data, making it difficult to transmit all of such data to the cloud for analysis by AI, regardless of how far network bandwidth is extended.

Another bottleneck in introducing IoT to manufacturing floors is due to a response delay caused by bilateral data transmission generated when data from sensors, motors and other devices must be transmitted to and from the cloud, even though instantaneous response is crucial at such manufacturing sites.

In its search for solutions to such issues, Omron is taking the initiative to introduce “intelligence developed through ITC” to manufacturing floors, namely, the incorporation of skilled workers’ know-how into the controls of equipment and processes by making a broad range of factory automation equipment that underpin automated production IoT-capable or implementing optimal AI algorithms in such equipment.

Developed under this concept, this AI-equipped controller is meant to immediately detect signs of equipment irregularity.

The machine automation controller’s AI algorithms allow it to learn the repeated movements of equipment from precise sensing data, which enables feedback to status monitoring and control of real-time machines.

How the machine automation controller uses AI at production processes:

In order to make AI technology a handy “tool” on manufacturing floors, Omron will advance the development of its controllers, vision sensors and other AI-equipped products and use AI and IoT to monitor the status of equipment and processes and assure product quality, thereby assisting its customers in realizing manufacturing processes that “produce no defects and do not stop”.

Having long developed and delivered FA equipment that is essential for various manufacturing sites, Omron says it has continued to offer advantages to its customers that have been made possible through proactive use the latest information technology, including EtherCAT (R), IO-Link and other open networks.

Tapping into its wealth of knowhow in implementing AI algorithms into equipment cultivated over more than two decades, OMRON has been able to develop the table tennis robot Forpheus, which is the epitome of Omron’s core technology of “Sensing & Control + Think”, “OKAO Vision” face/individual recognition technology, and the world’s first on-board sensor equipped with “technology that senses the degree of driver concentration”.

By combining automation knowhow for manufacturing floors using a variety of FA equipment and robot technology with state-of-the-art AI algorithms, Omron supports manufacturing businesses that are troubled by the shortage of human resources and rising labor costs, thus accelerating the move to realize the “manufacturing floors of the future” in which “machines bring out human capabilities and creativity”.