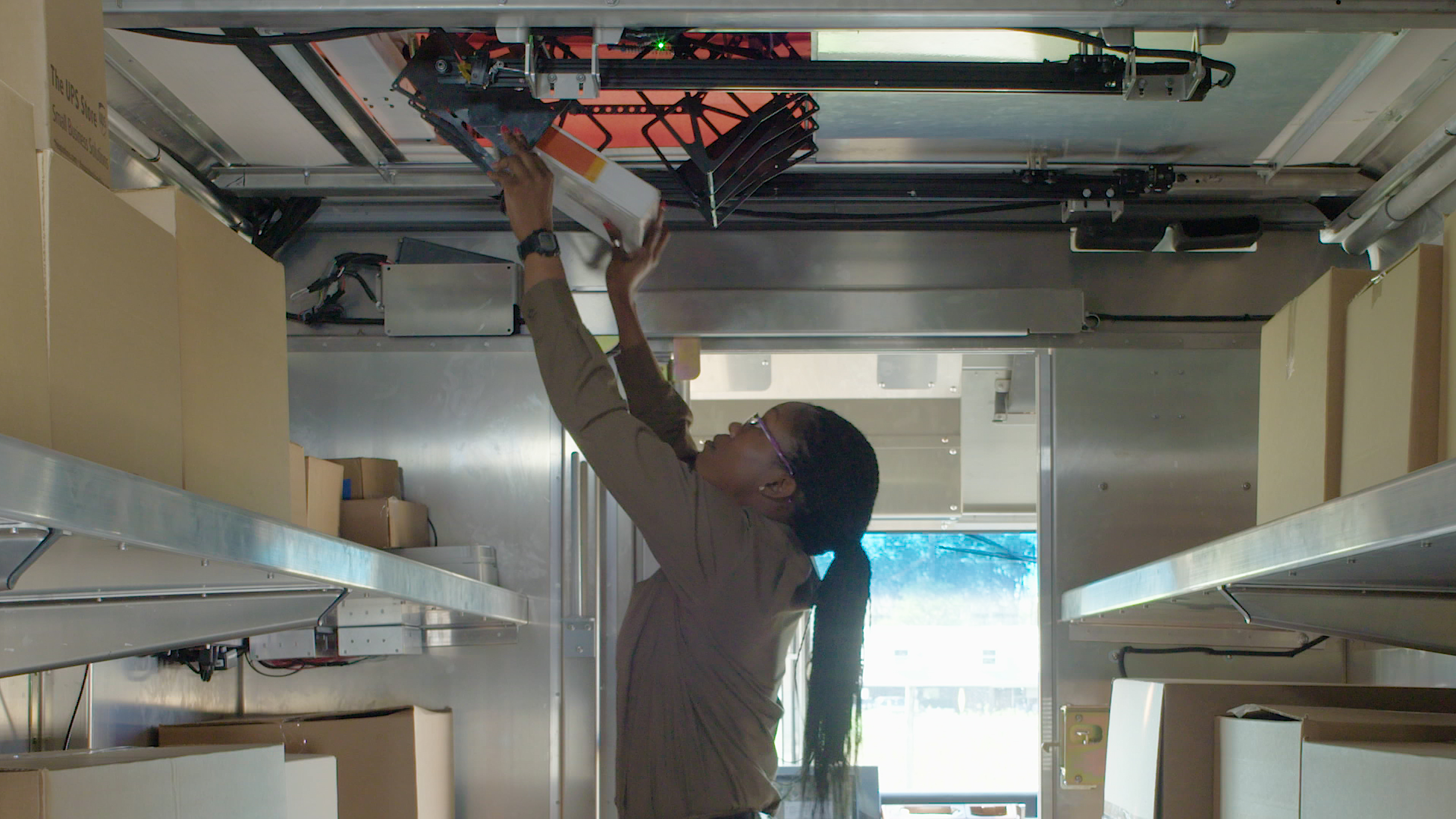 UPS says it has successfully tested a drone that launches from the top of a UPS package car, autonomously delivers a package to a home and then returns to the vehicle while the delivery driver continues along the route to make a separate delivery.

UPS conducted the test on Monday in Tampa, Florida with Workhorse Group, an Ohio-based battery-electric truck and drone developer. Workhorse built the drone and the electric UPS package car used in the test.

Mark Wallace, senior vice-president of global engineering and sustainability at UPS, says: “This test is different than anything we’ve done with drones so far. It has implications for future deliveries, especially in rural locations where our package cars often have to travel kilometres to make a single delivery.

“Imagine a triangular delivery route where the stops are kilometres apart by road. Sending a drone from a package car to make just one of those deliveries can reduce costly kilometres driven. This is a big step toward bolstering efficiency in our network and reducing our emissions at the same time.” 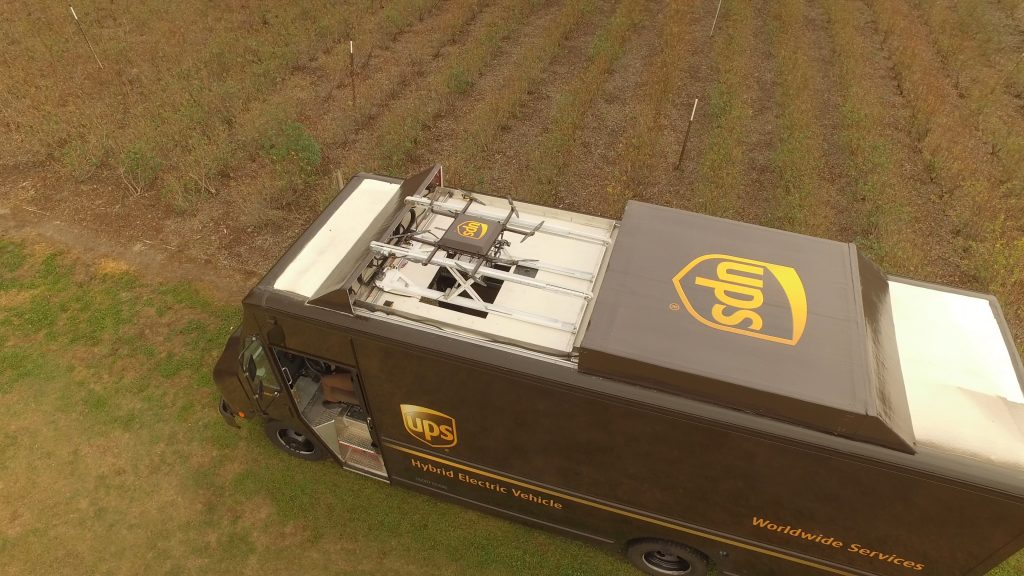 UPS has about 102,000 delivery drivers on the road each day. Rural delivery routes are the most expensive to serve due to the time and vehicle expenses required to complete each delivery. In this test, the drone made one delivery while the driver continued down the road to make another. This is a possible role UPS envisions for drones in the future.

“Drivers are the face of our company, and that won’t change,” Wallace said. “What’s exciting is the potential for drones to aid drivers at various points along their routes, helping them save time and deliver on increasing customer service needs that stem from the growth of e-commerce.”

The drone used in the test was the Workhorse HorseFly UAV Delivery system. It is a high-efficiency, octocopter delivery drone that is fully integrated with Workhorse’s line of electric/hybrid delivery trucks.

The drone docks on the roof of the delivery truck. A cage suspended beneath the drone, extends through a hatch into the truck. A UPS driver inside loads a package into the cage and presses a button on a touch screen, sending the drone on a preset autonomous route to an address. 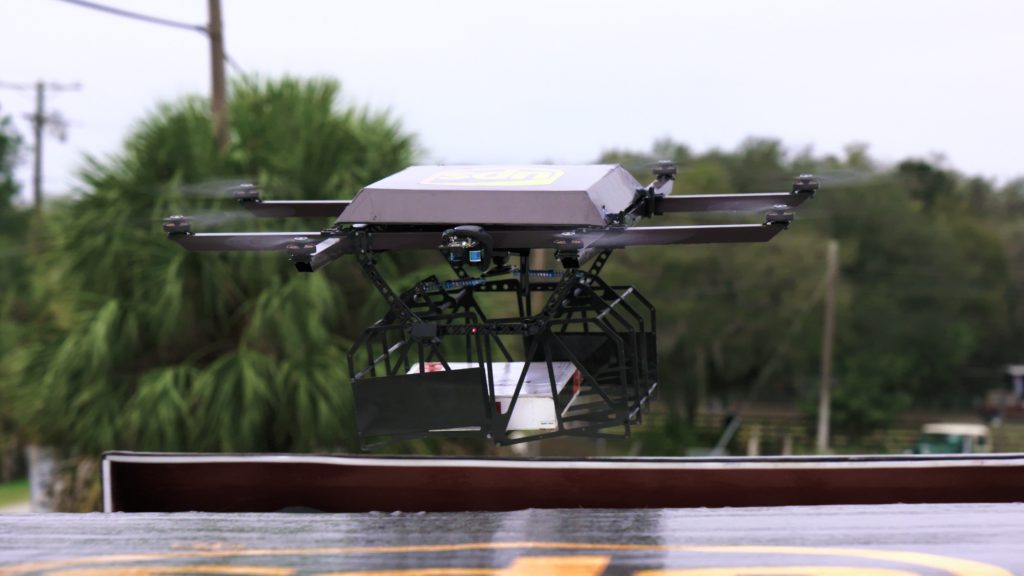 The battery-powered HorseFly drone recharges while it’s docked. It has a 30-minute flight time and can carry a package weighing up to 10 lb.

For this test, Workhorse preset the route for the drone. But in the future, routes could be determined by UPS’ On-Road Integrated Optimization and Navigation (Orion), which is the company’s proprietary routing software.

Stephen Burns, Workhorse founder and CEO, says: “It’s wonderful to see this technology applied in such a practical way.

“The drone is fully autonomous. It doesn’t require a pilot. So the delivery driver is free to make other deliveries while the drone is away.”

UPS has been testing automation and robotics technologies, including drones, for years. Last September, UPS staged a mock delivery of urgently needed medicine from Beverly, Massachussetts to an island three miles off the Atlantic coast.

Additionally, UPS is using drones extensively for humanitarian relief, partnering with third-party organizations to deliver life-saving blood and vaccines to hard-to-reach locations in Rwanda. UPS also is utilizing drones to check inventory on high storage shelves in its warehouses. 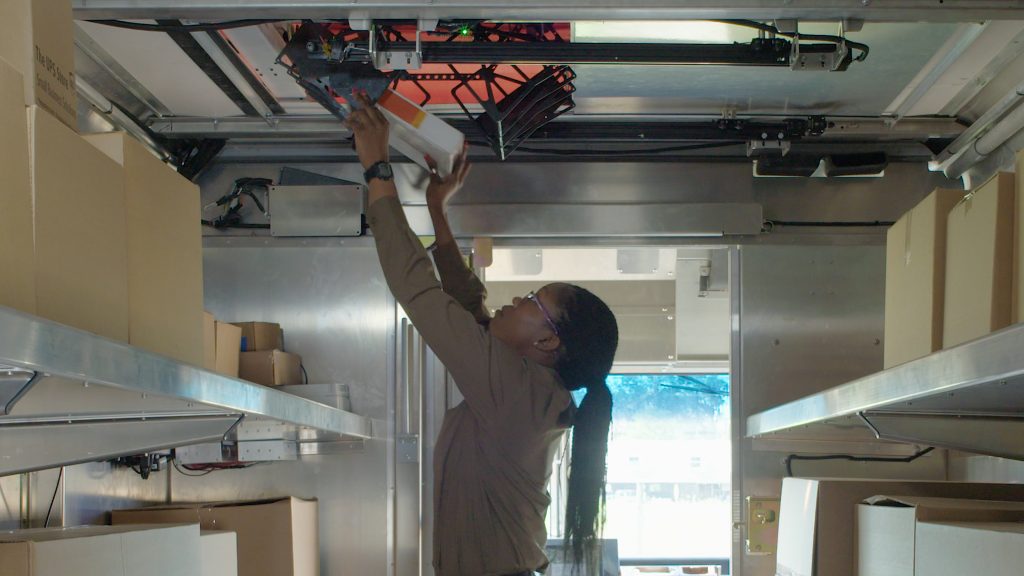 Unlike all of the previous tests, the most recent UPS drone test shows how drones might assist in making non-urgent residential deliveries as part of the day-to-day operation.

Last year, the US Federal Aviation Administration issued small unmanned aircraft systems rules that allow for some commercial use of drones and paved the way for future expanded applications.

UPS was one of 35 selected from a cross section of key stakeholders to serve on the FAA’s drone advisory committee.

The committee will provide the FAA recommendations on key drone integration issues that will ultimately allow for safe and secure operations of drones within the National Air Space System.