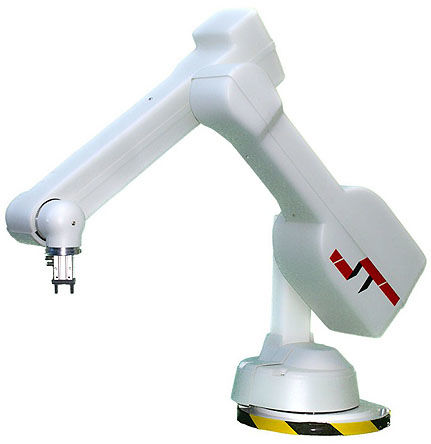 ST Robotics has launched what it says is a high speed version of their five-axis vertically articulated R17 robot arm.

The company says its new machine compares favourably to the Universal Robots UR5 model.

ST claims its new ST R17HS is one of the industry’s fastest robots. Standard tool speed is “over four times as fast as the nearest competitor”, yet it’s less than half the price, says the company.

ST Robotics offered a direct comparison between its R17HS and Universal Robots UR5, including the price:

ST says the R17HS uses “state-of-the-art” brushless servomotors and boasts an effective reach of 750mm, a repeatability of 0.2 mm and a maximum speed after acceleration of 480 deg/sec in the robot’s waist, elbow, hand and wrist, with a shoulder speed of 300 deg/sec.

David Sands, CEO of ST Robotics, says: “The R17HS is the result of years of development that puts us ahead of the field. Customers are finding it useful for high throughput production as well as testing applications requiring fast motion of test devices.”

Options include pneumatic, electric and vacuum grippers, and expandable I/O. As with all ST Robotics products, the exceptional manuals and support provided make installation and programming surprisingly easy.

ST says its new industrial robot system is “phenomenally robust, self-contained, can be unpacked and programmed in just a few hours, yet it is capable of the most intricate tasks”.

Applications include testing, sample handling and machine feeding. The mean time between failures is 10,000 hours and typically over a million cycles.

Also available, as a cost-saving comprise for $16,690, is the R17HSW, a high speed waist version of the R17 5-axis model for applications that do not require much speed in a vertical direction but have long X-Y distances requiring long waist moves.

ST says it has been making robots for 30 years, and its robots are utilized by companies and institutions such as Lockheed-Martin, Amazon, Motorola, Honeywell, MIT, Nasa, Pfizer and Sony, to name a few.

The robots are used in manufacturing, nuclear, pharmaceutical, laboratory and semiconductor industries.