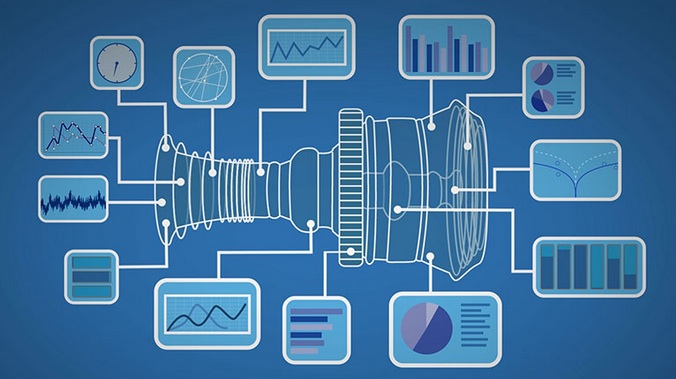 In fact, there are around 6 billion connected sensors in the world today and by 2020, more than 20 billion sensors will be connected worldwide, according to Gartner.

During a commercial airline flight, data such as the engine’s health and status is sent to diagnostic engineers to be closely analyzed.

That is what you call BIG data.

While big data can be a curse to manage, it is becoming the most critical asset.

Sensors generate billions of data points per second, which are sent to the cloud in real-time. These sensors send critical alarms to service centers to be diagnosed and solved.

Engineers spend hours conducting redundant, manual research to produce an actionable report for their clients. The entire process can take up to 16 hours.

The problem is that more than 50 per cent of all industry alarms are false positives, which still must be diagnosed by engineers. This means each year, hundreds of millions of dollars are spent on alarms that are not valid.

While more critical data is being generated daily, engineering experts are struggling to keep up with the increasing need to service alarms.

Manufacturers have sophisticated analytics and support systems to manage their customers’ assets, but this is not enough.

The current solutions are not solving the increasing problem.

NarrativeWave claims to be the first “situational intelligence platform for the industrial internet”.

The company says its platform ingests large volumes of data, communicates what is relevant, and for the first time, provides immediate actionable business decisions on large industrial equipment.

By combining knowledge from engineers and automating root cause analysis, the platform auto-generates business insights that assist engineers in making real-time decisions and provide relevant reports for their clients.

Most importantly, says the company, the engineer’s feedback is recorded, resulting in a system that gets smarter over time.

Engineers now have a solution that enables them to quickly diagnose what happened, why it happened, and what to do next.

When an alarm is triggered, the platform produces actionable insights, which explain the event and the reasoning behind it: the gas turbine is running hot because the level of vibration is too high (notice the “because”).

From these insights, the platform auto-generates a business decision, which is a recommendation as to what to do next or how to resolve the issue.

Engineers customize these recommendations to make them as accurate as possible, thereby creating an evolving knowledge base for SMEs (subject matter experts).

The NarrativeWave platform presents the data using automated explanations, generated by the NLG component, as well as corresponding visualizations and process maps to drive engineers to a conclusion.

The entire process of diagnosing an alarm and creating a report using NarrativeWave takes less than 5 minutes.

During a recent client engagement, NarrativeWave demonstrated a 95 per cent time reduction in processing alarms, greatly increasing efficiency and accuracy. This proved the opportunity for a multi-million dollar savings annually for this manufacturer.

These savings do not factor in the increased value to the manufacturer’s clients (for example, utilities, airlines, oil and gas operators) by presenting the business decisions generated by NarrativeWave and real-time intelligence on their equipment.

NarrativeWave has solved the “deterministic” data approach that auto-generates business decisions to reduce unplanned downtime, prevent catastrophic failures, increase profitability, and provide engineers with a platform to “to do more with less”.

NarrativeWave is essentially “salesforce for engineers”, the primary tool to amplify an engineer’s workflow while developing business decisions.

NarrativeWave suggests combining its software platform’s deterministic approach with operational decision automation and near-term predictions. The outcome would further improve the operations of manufacturers and their clients.

Most importantly it allows for safer planes, trains, automobiles, and power grids.

NarrativeWave recently launched a V2 product release and is in the process of closing their latest capital raise to further scale.

They currently have offices in Irvine, California and Scottsdale, Arizona. NarrativeWave is working with many of the leading industrial manufacturers, airlines, utilities, and oil and gas operators.

NarrativeWave is at the forefront of a new technology revolution. The Industrial Internet has the potential to deliver up to $11 trillion on an annual basis by 2025, with business-to-business solutions capturing 70 per cent market share, according to some, including GE Digital.