ZF teams up with Nvidia on artificial intelligence system for autonomous cars, trucks and industrial applications

ZF is one of the world’s largest automotive suppliers and a global leader in active and passive safety technology, and has been working with Nvidia to develop artificial intelligence systems for the transportation industry for some time.

The two companies are looking at various sectors, including: 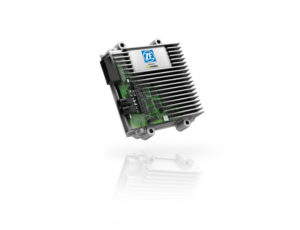 The company says the system will enable vehicles to better understand their environment by using deep learning to process sensor and camera data.

In addition, the companies are developing solutions for more advanced highly automated driving—in which systems have the capability to control the vehicle with greater levels of autonomy.

Current electronic control units in cars consist of numerous processors, each of which controls a system or a specific function. However, their computing power is not currently sufficient for autonomous driving.

ZF CEO Dr Stefan Sommer says: “With Nvidia, we are bringing the supercomputing power required for artificial intelligence into cars and commercial vehicles.

ZF says its ProAI system will have the capability to understand in real time what is happening around a vehicle, precisely locate itself on an high-definition map and plan a safe path forward.

The solution will meet automotive-grade standards to function when exposed to extreme temperatures, moisture and dust, says the company.

Series production is planned for 2018 onwards.

Rob Csongor, vice-president and general manager of automotive at Nvidia, says: “Transportation is a massive industry that AI can transform. With Nvidia’s autonomous driving technology and ZF’s powerful position in transportation, AI self-driving can now be enabled in any vehicle from passenger cars to commercial vehicles worldwide.”

Supercomputing and deep learning capabilities are dramatically accelerating the development of autonomous cars. The Nvidia Drive PX 2 AI platform provides the enormous computing power necessary to comprehend a 360-degree view around a vehicle and plan appropriate action, according to the company.

ZF is delivering ZF ProAI as an in-vehicle system capable of over-the-air updates to add new features and capabilities throughout the life of the vehicle. It is also configured for V2X applications, so it can communicate with other vehicles and with the surrounding infrastructure.

In addition, the learning and networking capacity of ZF ProAI can help make an entire vehicle fleet safer and more efficient by means of “swarm intelligence”, says the company.

Torsten Gollewski, head of advanced engineering at ZF, says: “We see Nvidia’s deep learning platform as the basis for our future AI-capable software, plus we will make it available to third parties.

“In addition to autonomous cars, we see many opportunities to bring this technology to commercial vehicles and other industrial applications. AI-capable software and deep learning will become more prevalent in many AI industries in the coming years.”

Meanwhile, back in the real world 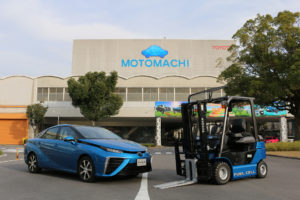 While autonomous forklift trucks equipped with AI are still largely at the idea stage, the traditional forklift truck is still going strong, and even cleaning up its act.

Toyota, one of the leading suppliers of forklift trucks, says it has started using two fuel cell forklifts (main picture), which have been manufactured by Toyota Industries Corporation, at its Motomachi Plant located in Toyota City, Aichi Prefecture, since January 31, 2017.

Fuel cell forklifts, which utilizes hydrogen to generate electricity, have excellent environmental performance as they do not emit CO2 or substances of concern during operation.

They are also very convenient given that they can be refueled in approximately three minutes. Furthermore, with their ability to supply electricity, these fuel cell forklifts can serve as a source of power supply during emergencies.

In order to reduce CO2 emissions from its plants, Toyota intends to replace existing conventional forklifts with fuel cell forklifts. This will start with the Motomachi Plant, with two units being adopted in 2017, followed by about 20 units in 2018, and eventually, reaching the goal of 170 to 180 units by around 2020.

Since the announcement of its Toyota Environmental Challenge 2050 in 2015, Toyota has been developing and implementing technologies by harnessing hydrogen energy, which is aimed at utilizing hydrogen in its plants to realize its Plant Zero CO2Emissions Challenge.

Toyota says it is steadily working on such initiatives to reach this goal, including plans to push through with adopting and utilizing fuel cell forklifts in plants on top of the Motomachi Plant.

This time, Toyota is introducing these two fuel cell forklifts by tapping on a joint initiative by the Ministry of the Environment, as well as the Ministry of Land, Infrastructure, Transport and Tourism in an effort to promote the use of fuel cells in industrial vehicles in order to realize a hydrogen society in Japan.

Toyota does already produce a line of autonomous guided vehicles for logistics, so taking the next step and making autonomous forklift trucks is probably more a matter of regulations rather than technology.