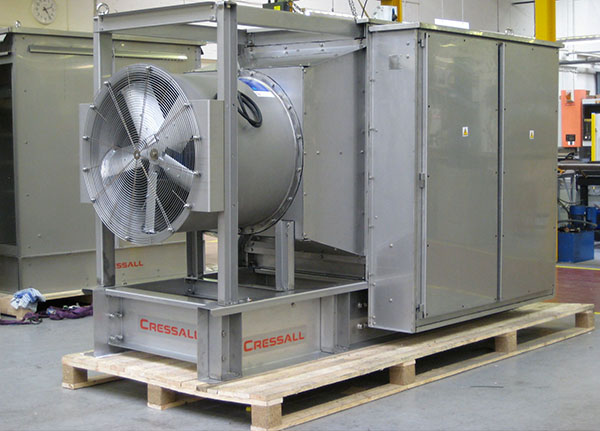 David Atkins, projects director at Cressall Resistors, explains why design is essential not only in art, but also in industry, especially when designing equipment such as power resistors for demanding environments like oil and gas

One of the most popular works of Renaissance sculpture is Michelangelo’s David, a piece that has become synonymous with human strength and beauty.

Despite its seemingly perfect proportions, a basic design flaw of the statue has recently been brought to light.

Recurring micro-fractures in the ankles might cause the statue to collapse under its own weight.

With the rise of electrical drive systems, power resistors are now commonly used in offshore drilling, particularly on mobile rigs and marine vessels of all types.

When electric motor driven machinery is stopped, the braking energy needs to either be put back into the power supply or dissipated as heat.

However, the sheer size and force of drilling in marine applications means power resistors need to be extremely reliable, rugged and durable.

Depending on the nature, voltage and installation area of the application, power resistors can be designed using earth potential Incoloy-sheathed mineral insulated elements, which protect the equipment against physical damage from environmental factors and prevent accidental contact with live voltages.

Alternatively, the resistor can be designed using live element technology, which is suitable for operation at more than 2kV by using double and tertiary insulation levels.

When considering the requirements of a power resistor, the cooling method is crucial. Depending on the layout and resources of the system, resistors can be forced, naturally-cooled or water cooled. Forced-cooled resistors have a smaller footprint and use a fan to dissipate more kW in a smaller space.

Naturally-cooled resistors are larger but more robust as there is no need to protect a fan. They can also take more overload capacity, meaning they have higher power ratings.

Water cooling can be used depending upon whether an existing water cooling system is operational and the extra flow required to cooling the resistors is available.

Power resistors can be used on oil rigs in the main drives that move the drill up and down. In an environment where space is limited and time is money, the rapid deceleration of the drill is essential and drive overvoltage protection is a key part of the process.

A couple of years ago, Cressall started work on an ENSCO 120 project in the North Sea.

The company supplied four forced air cooled braking resistors for the drives system of the rig. Each resistor has a 1200kW capacity and the enclosures, fittings and fan are constructed from type-316 stainless steel, which is perfectly suited to outdoor use.

As is the case with all Cressall fan cooled resistors, the cable box is IP56 rated and comes complete with an automatic anti-condensation heater, a PT100 temperature sensor and an airflow sensing switch.

Water cooled resistors are sometimes preferred when an existing water supply and water system are already in place. This was the case with a project that involved several BOA SUB C vessels, for which Cressall provided braking resistors to be used in winches and cranes.

The Offshore Subsea Construction Vessels (OSCV) in question had a control system upgrade and required a new range of resistors.

Cressall supplied sea water cooled braking resistors, which were housed on deck in a small fabricated building. The capacity varied between 300 and 400kW and fitted in perfectly with the existing electrical drive system, replacing the less reliable gearbox system that had been in placed previously.

The client had previously had negative experiences with both air cooled and water cooled resistors, and decided to switch to custom design forced air cooled products, which were fitted in an enclosure on deck.

Cressall recommended a 700 to 800kW continuously cooled, type-316 stainless steel power resistor, which fitted and functioned perfectly within the tensioner system and suited the application perfectly.

One of the safest ways to save on design and production costs when purchasing a power resistor is to accurately communicate the product requirements to the supplier.

Clear explanations regarding the system layout and specifications, the location of the resistor, the power requirements and footprint can help avoid unnecessary design delays or errors.

After all, unlike sculptures of biblical figures with weak ankles, power resistor design is not an art, but a precise process that results in rugged, reliable products that function perfectly in the harshest environments.