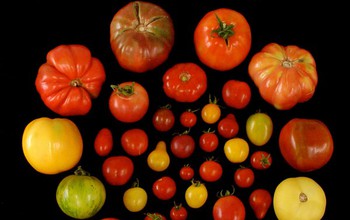 Their findings were published today in the journal Science.

“Around the world, the tomato is one of the most popular foods,” says Gert de Couet, director of the National Science Foundation (NSF) Division of Integrative Organismal Systems, which supported the research. “This state-of-the-art analysis sets the stage to return it to the taste of decades ago by breeding informed by molecular genetics.”

Step one for UF/IFAS horticultural scientist Harry Klee and his colleagues involved finding out which of the hundreds of chemicals in a tomato contribute the most to taste.

Next, Klee said, they asked: “What’s wrong with modern tomatoes?” As it turned out, modern tomatoes lack sufficient sugars and volatile chemicals critical to better flavor. Those traits have been lost over the past 50 years, says Klee, the Science paper’s lead author.

The researchers began looking at tomato alleles (one of two or more alternative forms of a gene that arise by mutation and are found at the same place on a chromosome). Alleles determine specific traits in organisms, whether tomatoes or people. Klee likened this to how different versions of genes in humans influence traits such as height, weight and hair color.

“We wanted to identify why modern tomato varieties are deficient in flavor chemicals,” Klee said. “It’s because they have lost the more desirable alleles of a number of genes.”

The scientists then zeroed in on the locations of those alleles in the tomato genome. Using a technique called a genome-wide association study, they mapped genes that control synthesis of all the “tasty” chemicals. Informed by genetic analysis, they replaced undesirable alleles in modern tomato varieties with desirable alleles.

“We identified the important factors that have been lost and showed how to move them back into modern types of tomatoes,” Klee said. “We’re just fixing what has been damaged over the last half-century to push them back to where they were, taste-wise. We can make the supermarket tomato taste noticeably better.”

Breeding a more flavorful tomato could benefit consumers as well as the tomato industry. According to the Department of Agriculture, the U.S. is second only to China in worldwide tomato production.

Florida and California account for up to three-quarters of all commercially produced fresh tomatoes in the U.S. As of 2014, Florida growers produced 33,000 acres of tomatoes worth $437 million annually, according to UF/IFAS research.

But breeding a better tomato will take time, Klee says. The genetic traits discovered in the study may take three or four years to produce new varieties.

From the journal Science.