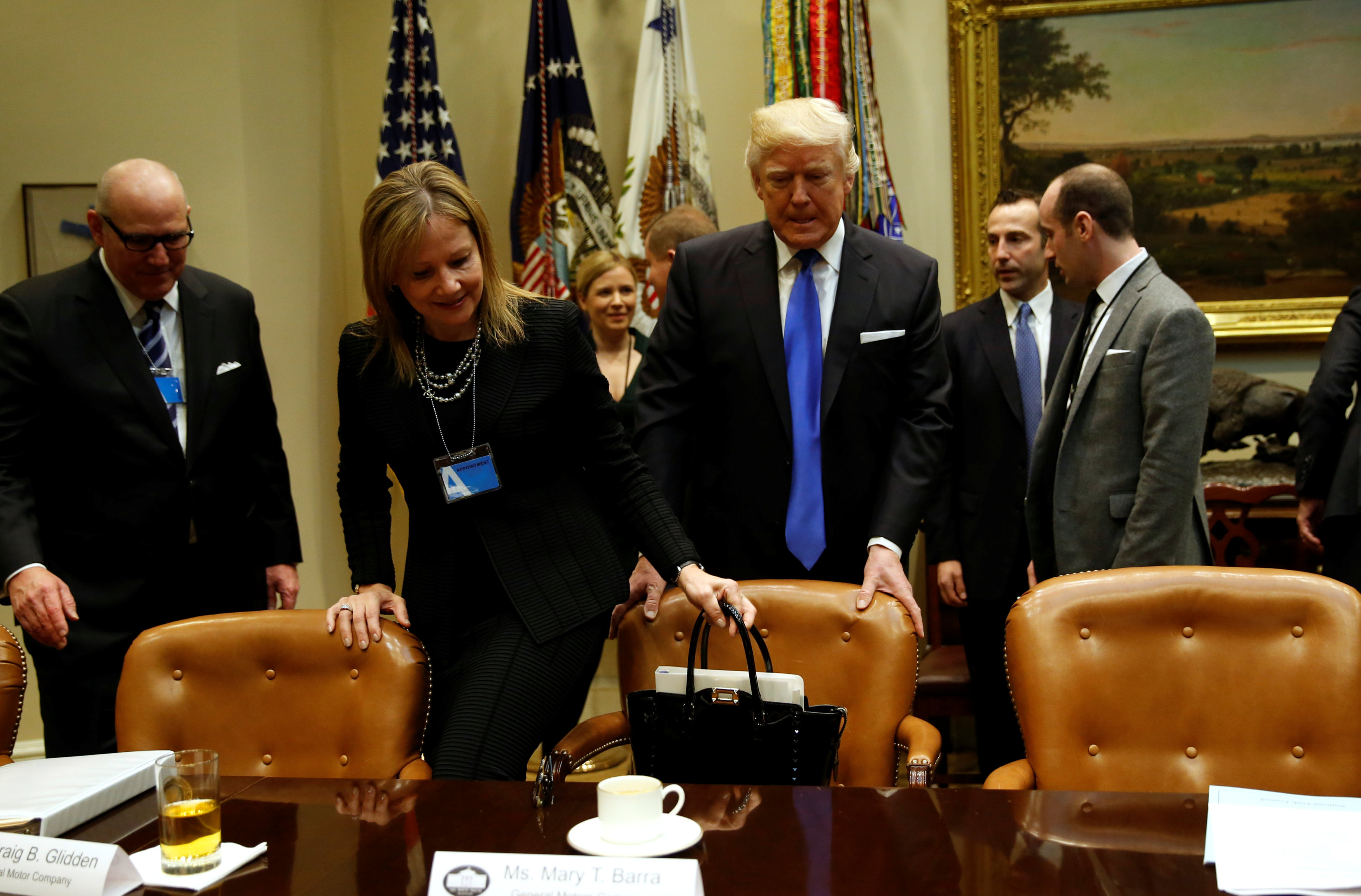 The new Republican president vowed to cut regulations and taxes to make it more attractive for businesses to operate in the United States. He promised frequently during his election campaign to be a job-creating president and stressed that message in his inaugural speech last Friday.

“We have a very big push on to have auto plants and other plants – many other plants,” he told reporters at the start of the meeting with auto executives. “It’s happening.”

The meeting was the latest sign of Trump’s uncommon degree of intervention for a US president into corporate affairs as he has repeatedly pressured automakers and other manufacturers to “buy American and hire American”.

Marchionne told reporters after the meeting that Trump did not give them specifics on what regulations he would cut.

GM, Ford and Fiat Chrysler have all announced recent new jobs and investments in the United States, but are still investing in Mexico. Fields said automakers wanted to work with Trump to create a “renaissance in American manufacturing”.

“We’re very encouraged by the president and the economic policies that he’s forwarding,” Fields told reporters, praising Trump’s decision to withdraw from the Trans-Pacific Partnership agreement, which Fields said did not address intervention in currency valuations by trading partners. “As an industry we’re excited about working together with the president,” he said.

Barra said there was a “huge opportunity” to work together with the government to “improve the environment, improve safety and improve the jobs creation”.

Trump has criticized automakers for building cars in Mexico and elsewhere and has threatened to impose 35 percent tariffs on imported vehicles.

GM said in 2014 it would invest $5 billion in Mexico through 2018, a move that would allow it to double its production capacity, and Barra has said the automaker is not reconsidering the plan.

Earlier this month, Ford scrapped plans to build a $1.6 billion plant in Mexico and said it would instead invest $700 million in a factory in Michigan. Ford will still move production of Focus small cars to Mexico from Michigan, but will cut total production of the cars by consolidating their assembly in an existing Mexican plant.

US automakers have been reluctant to open new US auto plants in recent years, but they have expanded operations at existing US plants.

GM and Ford last built new US assembly plants in 2004, while Fiat Chrysler opened a new transmission plant in Indiana in 2014.

With flattening US auto sales and some excess capacity, US automakers may be reluctant to agree to open new plants, which likely would not come online for several years.

Tuesday’s gathering was the first time the CEOs of the big three automakers have met jointly with a US president since a 2011 session with Barack Obama to tout a deal to nearly double fuel efficiency standards by 2025. Fiat Chrysler is the Italian-American parent of the former Michigan-based Chrysler.

Automakers have urged the Trump administration to rethink those aggressive fuel efficiency mandates.

Barclays auto analyst Brian Johnson said in a note Tuesday that he thinks “automakers will be willing to make a deal that would bring back jobs to the US (whether by voluntary commitments or tariffs or border taxes is less clear) in return for a slower ramp of (fuel efficiency) targets and related state-level mandates”.

US and foreign automakers have been touting plans to boost American jobs and investments in the face of Trump’s comments. Trump, a New York businessman, often singled out Ford’s Mexico investments for criticism during his election campaign.

While automakers are adding US jobs they are also cutting US small car production. On Monday, GM ended two shifts of production of small cars in Ohio and Michigan, cutting about 2,000 jobs.