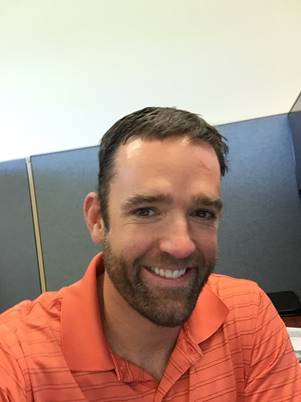 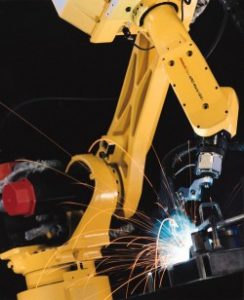 Mark Sumner, national sales manager for Acieta, a provider of industrial automation solutions, says large robots which used to be the preserve of mega corporations are gradually finding their way into smaller enterprises

Robots benefit manufacturers in many ways: improved quality, increased capacity and a safer workplace. That’s why sales of robot handling systems increase year after year, and it’s not just high-volume manufacturers that are buying them.

Dramatic advances in robotic technologies and lower costs are reducing barriers to implementation, making them effective in medium- and low-volume environments.

Statistics from the International Federation of Robotics show that 253,748 robots were sold in 2015. One-third of these went into the automotive sector, 25 percent to electrical and electronics companies, and 12 percent to the metal and machinery industry. The remainder ended up in industries as diverse as aerospace, food packaging and pharmaceuticals.

Robots can move a variety of things. This makes them more versatile than any other type of machine used in manufacturing. A drill press can only drill holes, but a robot can do almost any task. Robots are used for: 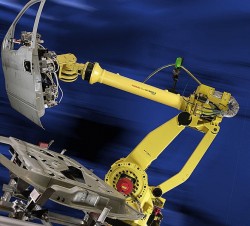 Consistency: Never tiring, never distracted, a robot follows the taught path at the same speed every time. Each cycle is performed exactly the same way. This prevents variation and defects, customer complaints and scrapped product.

Capacity gains: No breaks, no vacations. A robot does the job without pause, and that means more uptime and output. Used at bottleneck processes, robots increase the capacity of an entire line or plant, saving on overtime costs or letting sales reps chase more business. Many manufacturers find robotic automation lets them keep manufacturing work in the US, and even bring it back from overseas.

Worker protection: Many factory jobs can be dull, dirty and dangerous, resulting in fatigue, mistakes and high turnover. Isn’t it better to let a robot do that work? Repetitive lifting and bending causes musculoskeletal disorders, but a robot does it without risking injury. Likewise, a robot can work where there are fumes, smoke or dust. Putting robots to work protects factory employees and saves money, too.

Product and customer protection: Contamination is a major concern in industries from medical device packaging to automotive painting and semiconductor manufacturing. Using robots instead of human workers helps maintain the exceptional levels of cleanliness essential for product quality and customer safety.

Company size and skills are no barrier

Small- and medium-sized manufacturers often think they can’t afford the internal skills needed to implement and support robotics. That was true a few years ago but it’s changing rapidly.

Modern Fanuc robots are straightforward to program and very reliable. Plus, Fanuc robot system integrators are experienced with guiding and supporting new users.

Unlike a lot of automation, robots aren’t tied to a specific product. Should a new design or product line be introduced, reprogramming the robot takes just minutes. This flexibility makes robots a low-risk investment for small-to-medium volume manufacturing and. No wonder everyone’s looking at robots.

Mark Sumner is the national sales manager for Acieta, which specializes in robotic automation with the objective of helping American manufacturing be globally competitive.