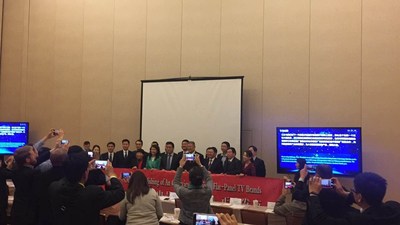 Tech leaders in China believe 90 per cent of jobs in some sectors of the economy could be replaced with artificial intelligence systems.

Speaking at a press conference ahead of the China Information Technology Expo, the experts said AI will be the main theme of this year’s event.

Cite 2017 will be held from April 9 to 11, 2017. Organisers held a press conference in Las Vegas, Nevada recently, at which they showcased the rising Chinese firms that will “lead the way” in the fields of AI, virtual reality and intelligent robots, the three themes that they expect will generate the most buzz at this year’s exhibition.

AI is the core theme of the Fifth Cite 2017, and a future trend as well. Kai-fu Lee, a Chinese-American tech expert and venture capitalist based in Beijing, predicts that “in the next 10 years, 90 per cent percentage of occupations like translators, correspondents, assistants, security guards, salesmen, servicemen, will be replaced by robots, partially or completely”.

Meanwhile, some new types of jobs will emerge. A part of traditional work will be able to proceed with the help of AI.

Cite’s press, which it claims was “the first man-robot co-hosted press conference”, perfectly illustrates this, say the organisers. At the conference, organisers used an intelligent robot to do the translation work, instead of interpreters.

Ahead of the fifth annual  members of the press and media outlets got a chance to meet some of the most promising technology firms coming out of Beijing, Shenzhen, Shanghai and elsewhere across the world’s second-largest economy.

Among the companies already booked for the event are Fanuc, Siason, Foxconn and Ubtech.

Wu Shengwu, deputy director of the electronics department of the Ministry of Industry and Information Technology, referred to one such leading AI company that will educate the public on this technology.