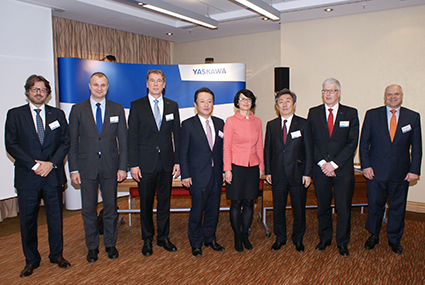 Industrial robotics and automation giant Yaskawa is expanding its manufacturing operations in Europe.

The company says it aims to become one of the two leading manufacturers of industrial robots in strategic target markets in the medium term.

Yaskawa says plans to expand its production capacities and open a new robot manufacturing plant and a new European robotics development centre in Slovenia in addition to its existing production facilities in Japan and China. Two hundred additional jobs will be created.

The first Yaskawa Motoman robots from all-European production are expected to roll off the production line in 2018. The company estimates that the factory should satisfy about 80 per cent of the European demand for robots. Total investments are estimated to be in the order of €25 million.

As one of the biggest global players in the industrial robot sector with more than 350,000 installed units sold and a leading international supplier of drive and automation technology, Yaskawa says it is pursuing an “ambitious expansion strategy in Europe”.

In doing so the company, which was founded in 1915, says it is intentionally bucking the international trend towards relocating technological know-how and production competence from Europe to Asia.

Today Yaskawa employs about 350 development and application engineers in Europe. The new production and development capacities will permit even faster customized robotic solutions in Europe.

This will also strengthen the co-operation with original equipment manufacturers in these markets. In addition, Yaskawa will be keeping up “even more closely with the European market and technological trends”.

Stern says: “Europe is a leader in many technologies, and we want to consistently demonstrate to our customers that we are happy to be here and engage in the joint development of even more efficient solutions.”

Yaskawa is expanding its European activities through investments in the existing robot business as well as electric drive technology.

The company most recently extended its business model through strategic acquisitions in the fields of industrial control technology and green energy. Yaskawa is prioritising energy solutions in the field of wind power and the electrification of ship drives.